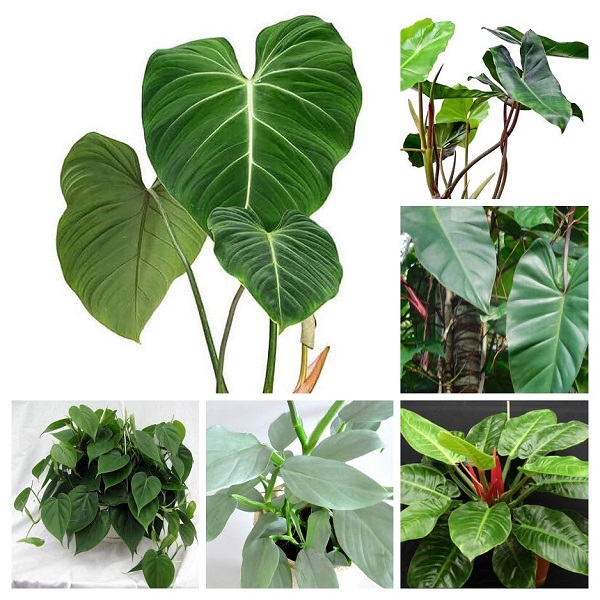 Philodendron Plants are flowering plants in the family, Araceae, mostly native to tropical forests of Central and South America.

There are about 500 species in the Philodendron genus which is the largest genus in the Araceae family.

The genus name, 'Philodendron', comes from the Greek words philo- or "love, affection" and dendron or "tree" meaning 'tree-loving' in reference to their growth habits.

Philodendrons have some unique structures called cataphylls. These are modified leaves that surround and protect the newly forming leaves.

They are usually green, leaf-like, and rigid while they are protecting the leaf. In some Philodendron species, the cataphylls can even be rather succulent.

The inflorescence consists of a leaf-like hood called a spathe which encloses a tube-like structure called a spadix.

A single inflorescence or a cluster of up to 11 inflorescences can be produced at a single time depending on the species. The spathe is usually waxy and bicolored.

It is important to note that Philodendron Plants are considered toxic to both humans and pets. According to National Capital Poison Center, Philodendron plants contain Calcium oxalate crystals.

If ingested, they can cause burning and swelling in the mouth and throat, vomiting, diarrhea and abdominal pains. Therefore, keep your Philodendrons from the reach of children and pets.

Philodendron varieties are easy to grow indoors if provided with the right growing conditions. Generally, these plants require bright indirect light, warm and humid conditions, and well-drained moderately moist soil that is rich in organic matter.

We have herebelow listed some Philodendron varieties for growing indoors with pictures and care guides. 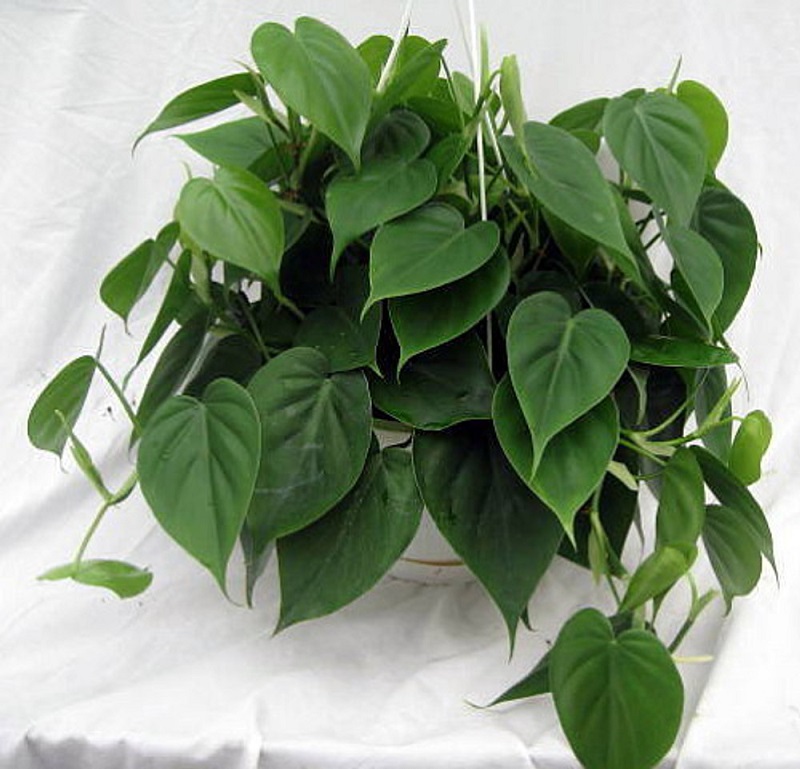 Heartleaf Philodendron also called Sweetheart Plant is an easy-care houseplant that will thrive in a wide range of conditions. 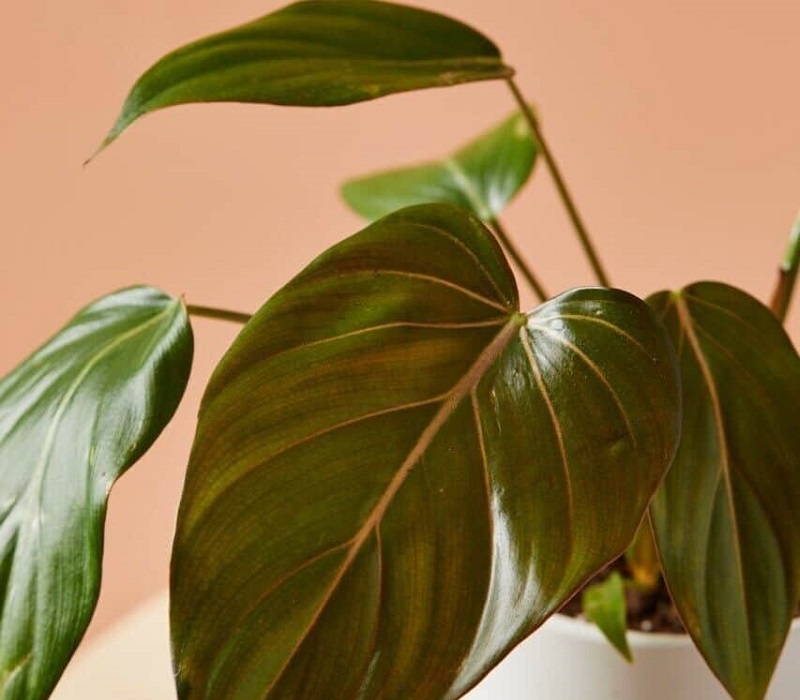 Philodendron 'Summer Glory' is a hybrid plant with an upright, clumping growth and large, deeply-veined leaves which start off reddish-bronze and turn deep green as they mature.

The young leaves are surrounded by red catapylls. Venation in young leaves is purplish-pink but fades with age. The deep-green mature leaves have a red leaf margin. 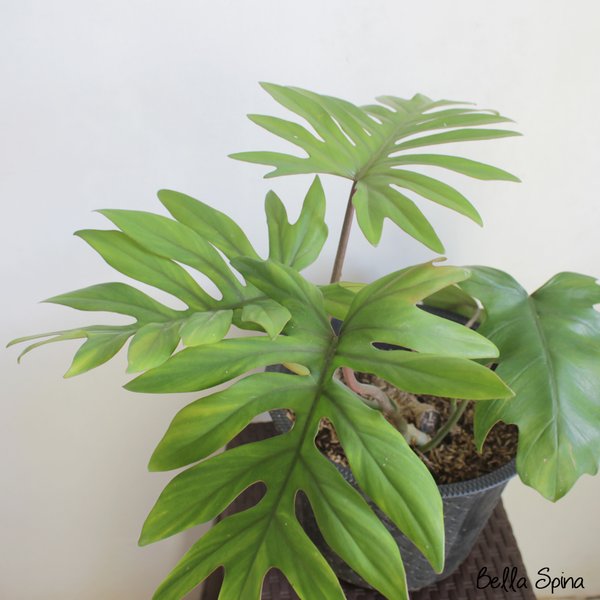 The leaves come in various shades of green and have a glossy sheen. They are highly divided which gives them the appearance of a palm's frond. 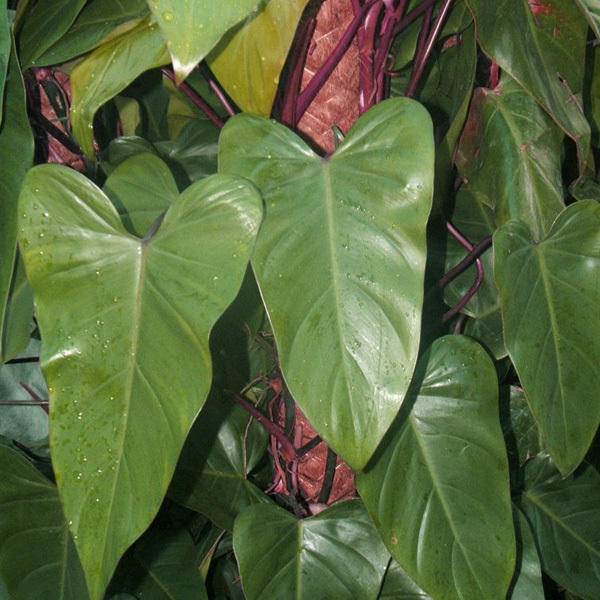 The heart-shaped leaves appear reddish and eventually turn green as they mature. The leaves measure about 16 inch long. 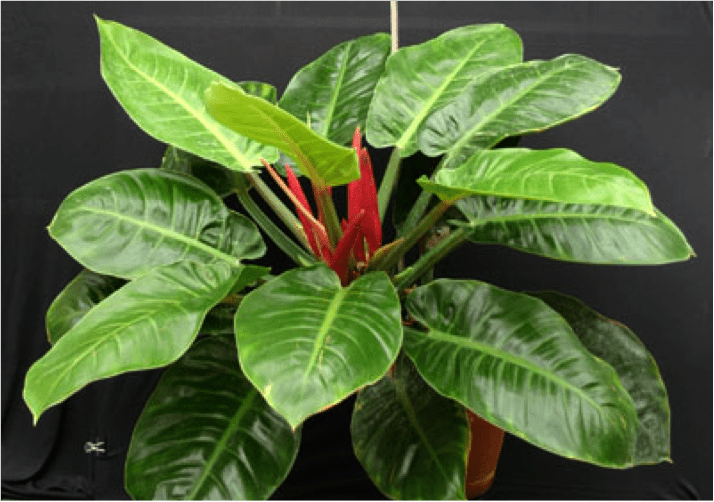 Spadeleaf Philodendron can grow to a height of 8 ft and 3 ft wide when grown indoors. The mature leaves are about 2 ft long and 1 ft wide. 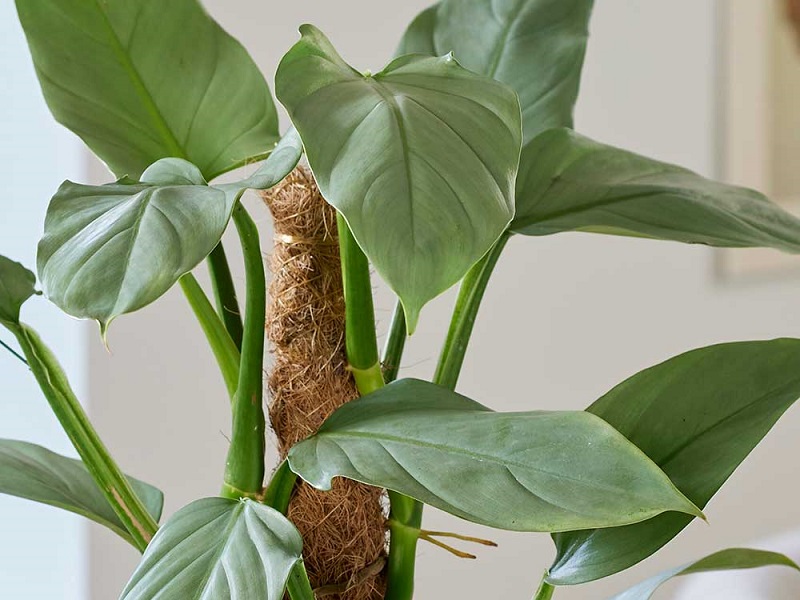 Silver Sword Philodendron can grow to a height of 10 ft and 5 ft wide in its native habitat but it only grows to about 5 ft when grown indoors. 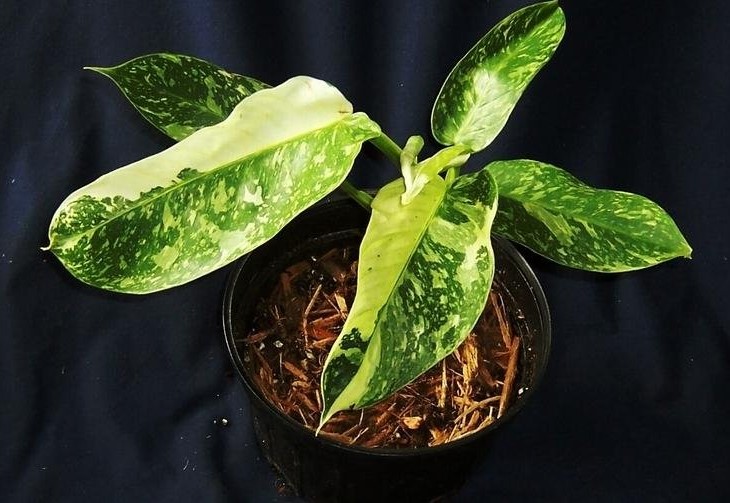 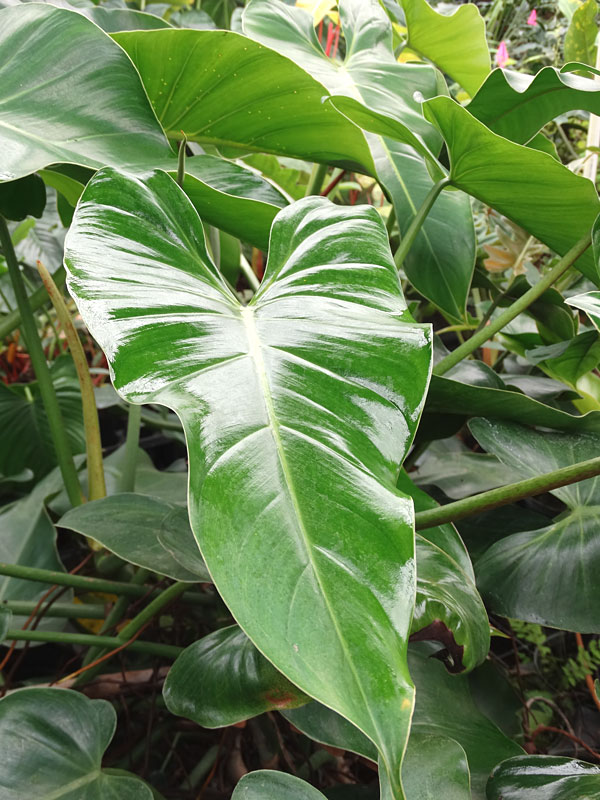 Philodendron sagittifolium is an easy-care, vigorously-growing climber whose arrow-shaped leaves are pale green on top and the undersides are dark-green with light green spots.

Philodendron sagittifolium is a drought tolerant plant which can grow to a height of 10 ft in a few months. The leaves are about 24 in. long by 12 in. wide. 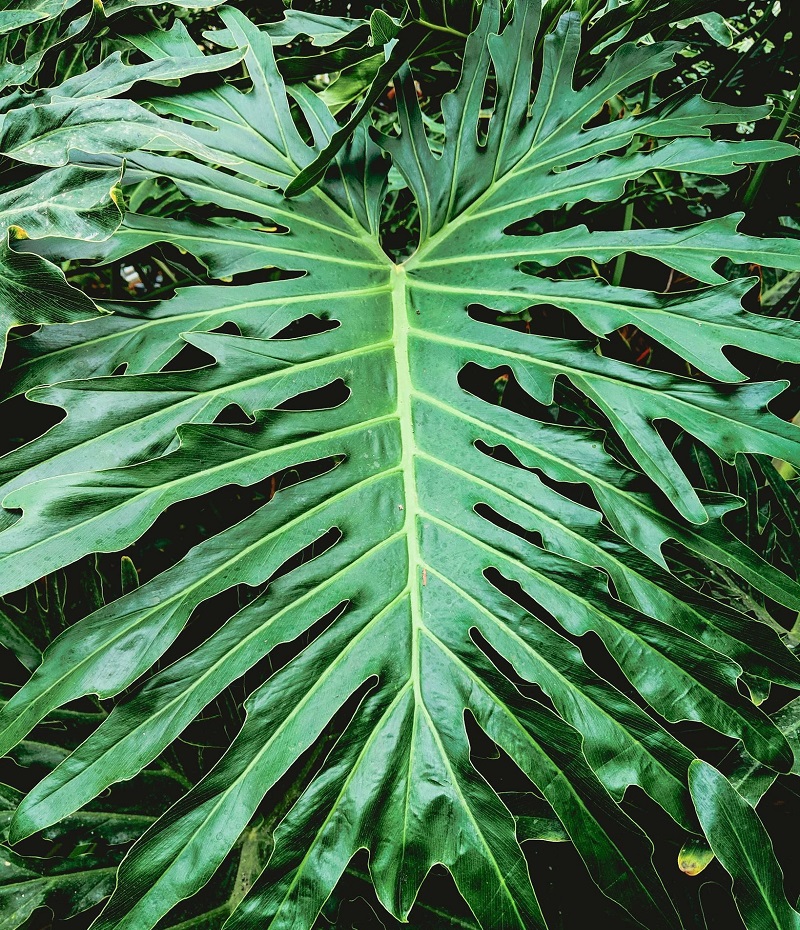 Lacy Tree Philodendron also called Horsehead Philodendron is an easy to grow non-climbing large houseplant which is most impressive in a large space.

Horsehead Philodendron leaves can grow up to 2 ft long and are attached to long smooth petioles about 2 ft long. Read more on how to grow and care for Lacy Tree Philodendron (Philodendron selloum) indoors. 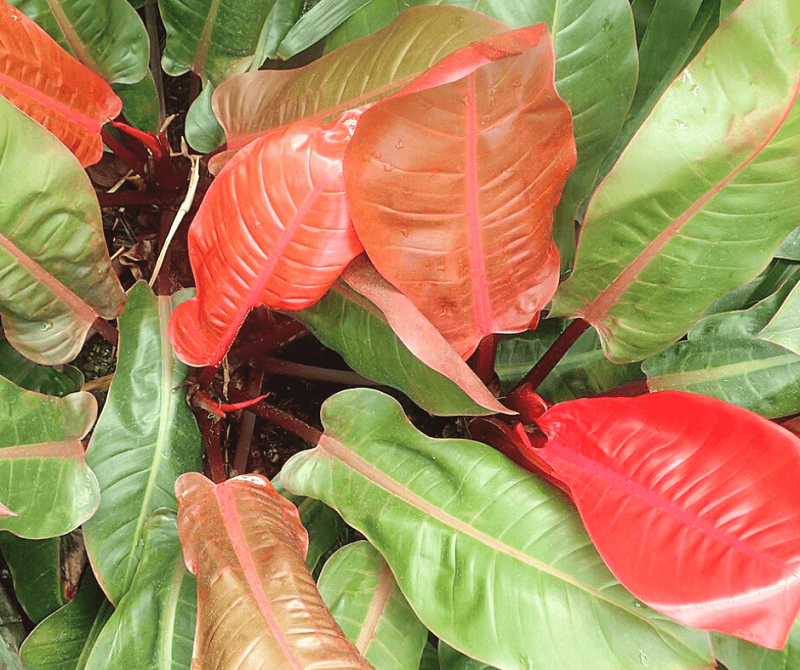 Philodendron Sun Red is a non-climbing upright bush which looks magnificent in a pot. It is a spectacular addition to any house plant collection.

Philodendron Sun Red can grow to a height of 8-10 ft but when grown indoors it rarely exceeds 4-5 ft high by the same width.Read more on how to grow and care for Philodendron selloum 'Sun Red' indoors. 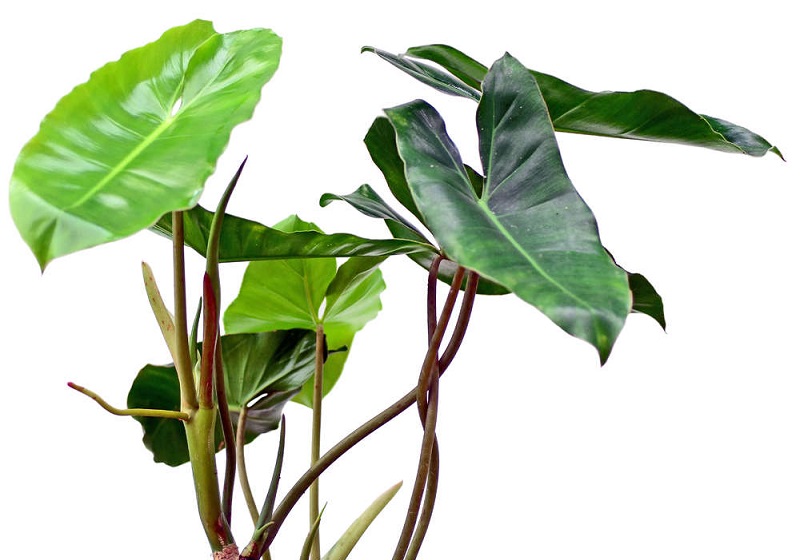 Philodendron burle-marxii is a fast-growing, low maintenance plant with glossy, leathery, emerald-green, cordate leaves which is perfect in a hanging basket or climbing on a moss pole.

It is named after Robert Burle Marx (1909-1994), a Brazilian Landscape Artist whose designs of parks and gardens made him world-famous.

Philodendron burle-marxii is native to South America from Colombia to Ecaudor. It can grow as a creeper, spreading on the ground or as a vining climber on a moss pole. The plant can grow to a height of 2 ft and about 4 ft wide.

The emerging leaves have a copper-gold velvety sheen but as they mature, they become blackish-green with pale green veins. The name 'melanochrysum' means 'black gold' in reference to the tiny gold sparkles on adult plants which appear in sunlight.

Philodendron Black Gold is native to South America in the Andean foothills of Colombia. It can grow to a height of 12 ft and 8 ft wide in its natural habitat but when grown indoors it grows to a height of about 8 ft and 3-5 ft wide. 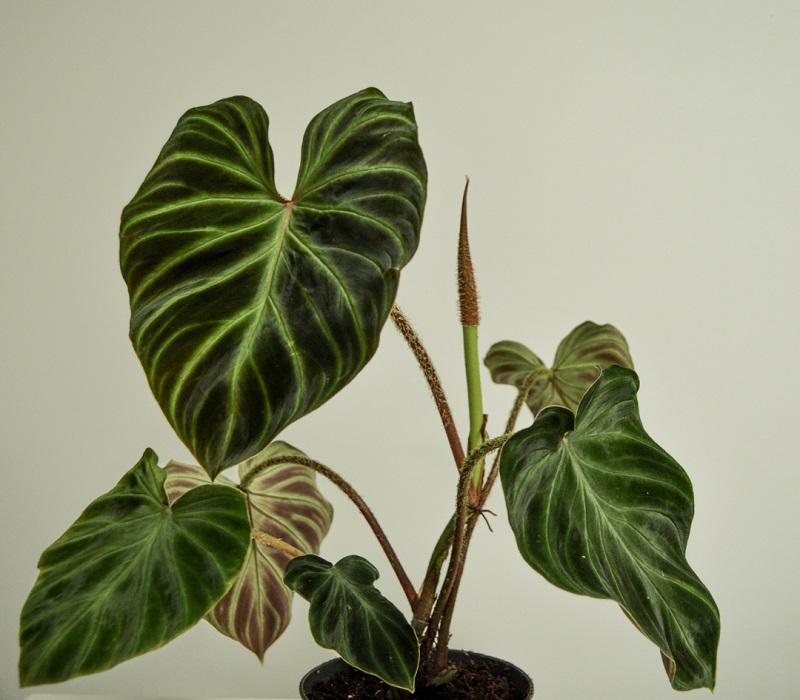 The leaves are large, heart-shaped with slightly wavy edges, white veins and reddish undersides. The stems have hairy bristles.

Philodendron verrucosum can grow to a height of 3 ft and 2 ft wide. It is a finicky Philodendron as it does tolerate wide variations in growing conditions. 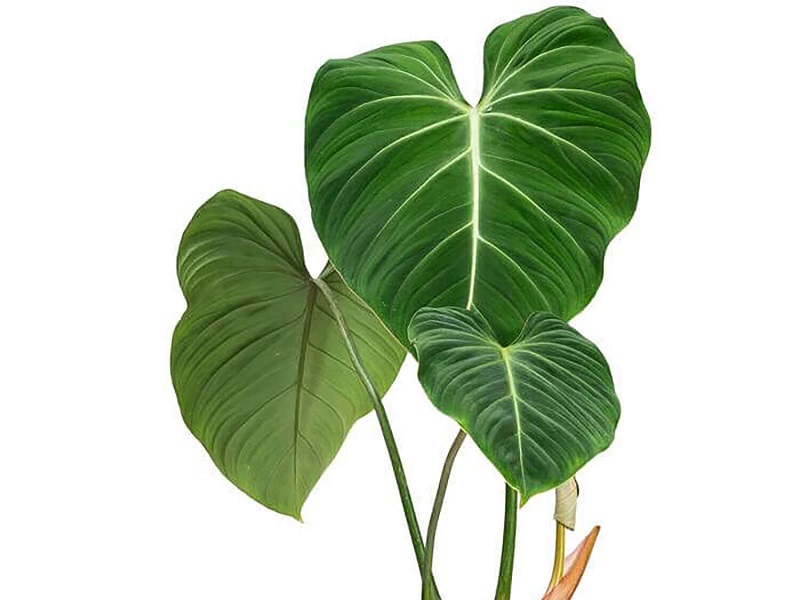 Philodendron gloriosum is a crawling terrestial plant whose leaves are heart-shaped with a velvety surface, pink margins and pale-green, white or pinkish veins.

It is native to Colombia where it creeps on the forest floors. This Philodendron is listed as a vulnerable plant due to the destruction of its natural habitat for farming activities. 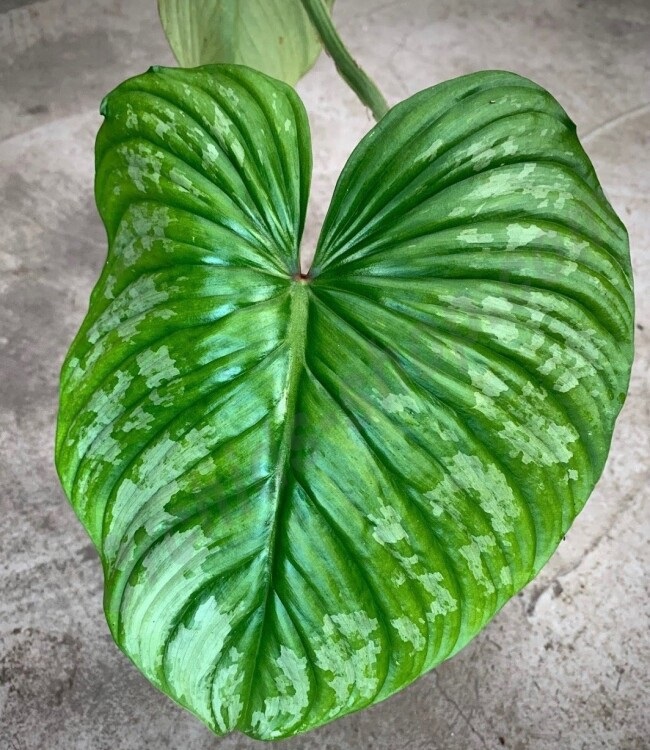 Philodendron mamei is a low maintenance terrestial species with a creeping growth habit and prostrate stems.

The matte, dark-green, heart-shaped leaves have silver markings and deep veins which give the leaves a ridged appearance.

Philodendron mamei is native to Ecaudor and Peru. It was first collected by Europeans in 1882. The plant has become an invasive species to the Cook Islands and Society Islands. 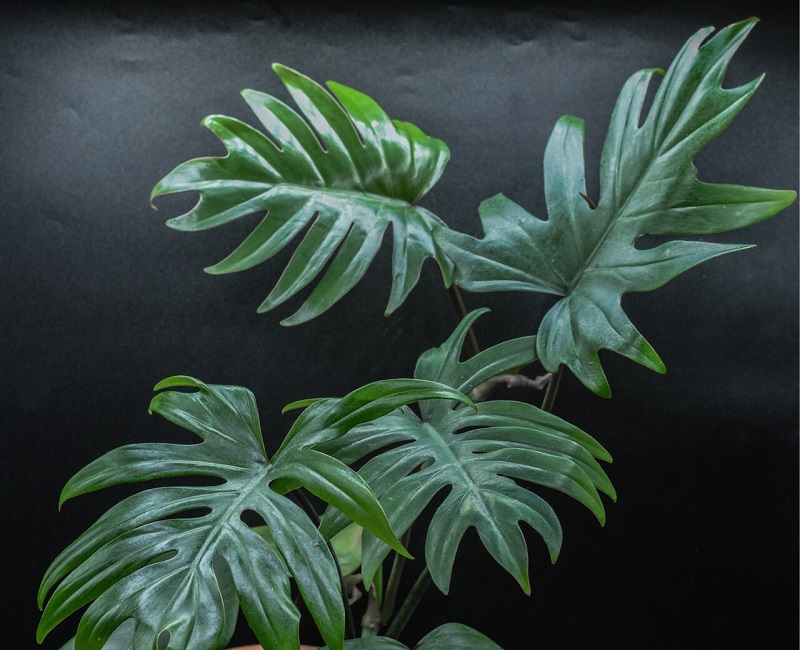 It bears deeply lobed, bright-green, rubbery leaves, about 7 in. long with 6 lobes on either side of the leaf blade and look like a palm frond.

The plant is named in honor of an aroid botanist, Dr. Simon Mayo. It can grow to a height of about 2-4 ft in bright, indirect light and warm, humid conditions. 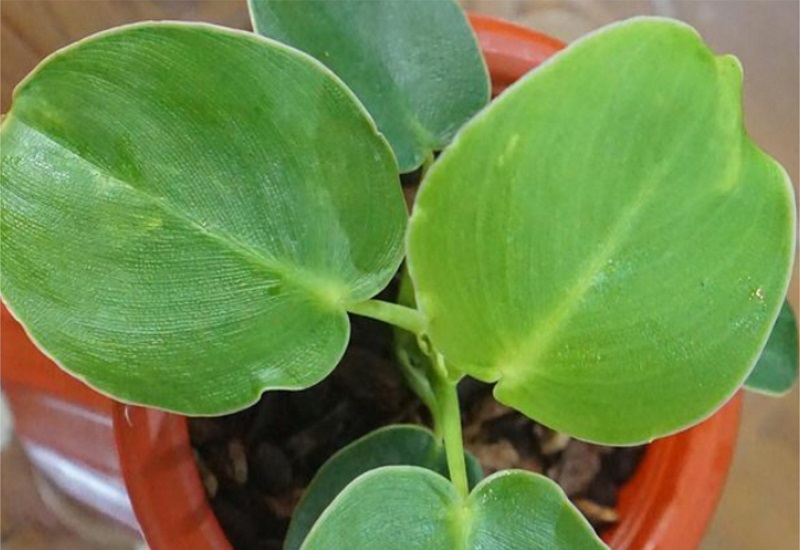 The leaves wrinkle up (fold) as they attach to the stem like Pig's ears and hence the common name, 'Sow's Ear Plant'. The name 'rugosum' comes from 'ruga' which is Italian for 'wrinkle' in reference to the wrinkling of the leaves as they meet the stems.

Pigskin Philodendron is native to the montane forests of Ecaudor. The plant is endangered in its native habitat due to destruction of the same to farming. It can grow to a height of 10-15 ft, therefore, requiring support by a moss pole. 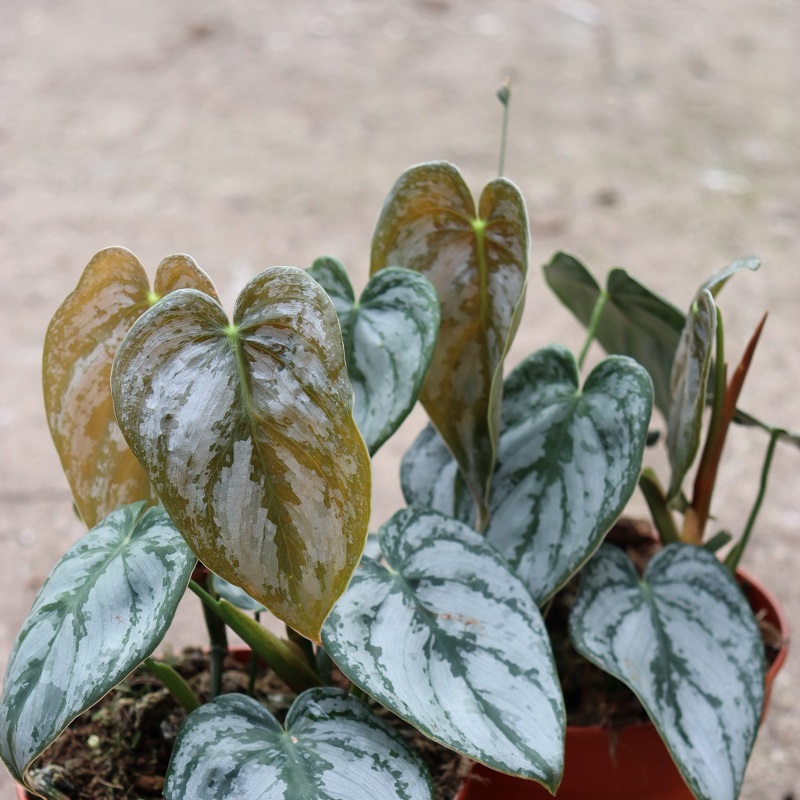 Brandi Philodendron is native to southern Colombia, northern Brazil and Bolivia where it grows as an epiphyte on trees.

Philodendron brandtianum can grow to a height of 4-5 ft in medium to bright indirect light. The plant is often mistaken for Scindapsus pictus (Silver Satin Pothos). 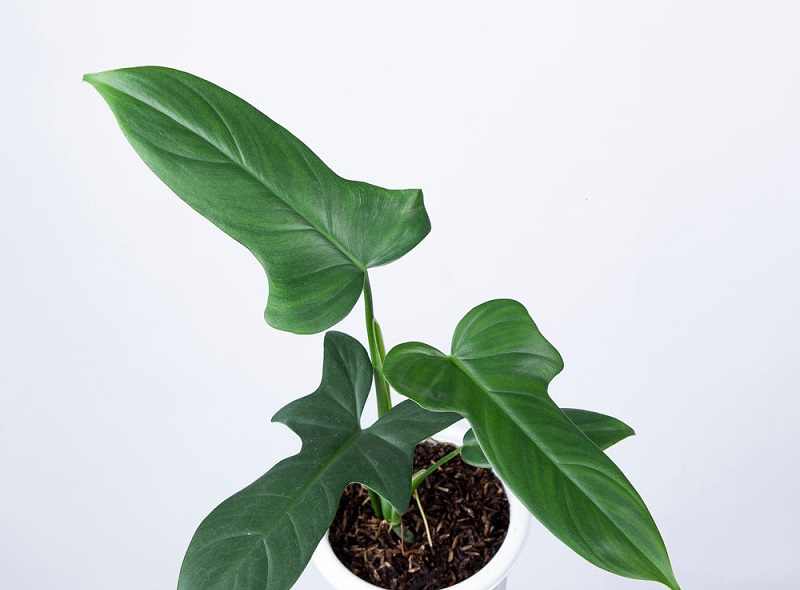 Philodendron bipennifolium is a rare, vining (climber) plant native to the tropical rainforests of Brazil, Argentina, Bolivia and Paraguay where it grows as a hemiepiphyte.

The leaves in Fiddleleaf Philodendron are gloss, leathery, lobed, elongated about 18 in. long and have a fiddle or horse-head shape.

Philodendron bipennifolium is a climber ideal for a hanging basket where the spectacular leaves can be displayed or it can be supported with a moss stick to grow upright. 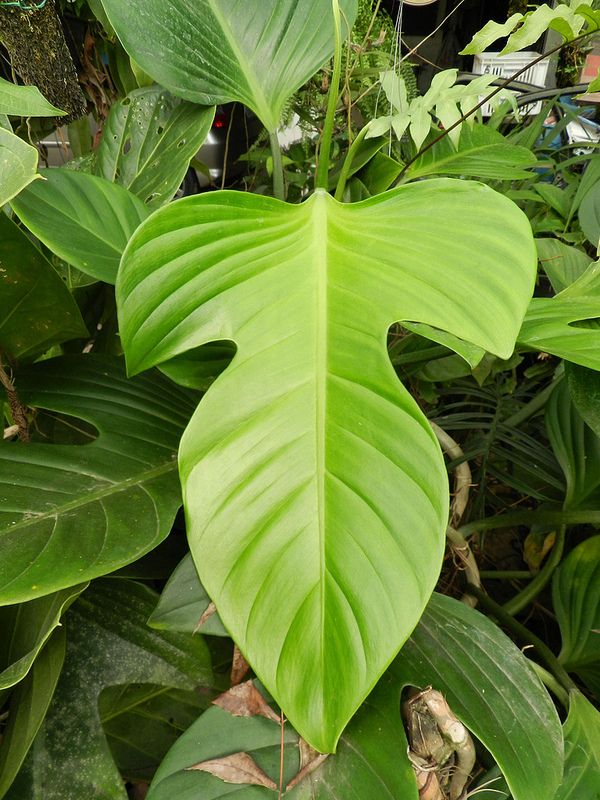 The leaves in Philodendron Panda are three-lobed, fiddle-shaped, dark-green with more rounded tips. The stems are green colored.

Philodendron pandurifome can grow to a height of about 6-8 ft. It needs to be provided with a moss stick to grow upright and develop large leaves.