How to grow and care for Spineless Yucca Indoors 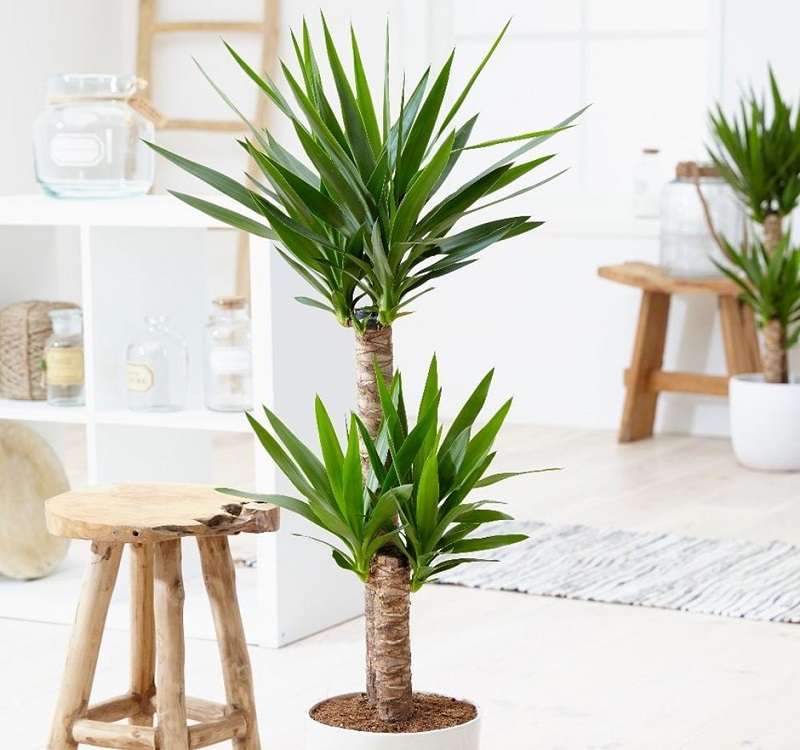 Spineless Yucca is an ideal False Palm for a hallway or large space. The woody trunk bears a crown of long, leathery, strap-like, spineless leaves and white bell-shaped flowers may appear on mature plants. It requires a deep, well-drained container and a well-lit spot with some sunshine. The plant can grow in a variety of soils and is drought-tolerant. It grows best in a hot semi-arid climate, so the plants are susceptible to root-rot if overwatered. Spineless Yucca is native to Mexico and Central America. In its natural habitat it can grow to a height of 30-40 ft. Its other common names are Soft-tip Yucca, Blue-stem Yucca, Giant Yucca, Yucca Cane and Itabo.

How to Grow Spineless Yucca

Spineless Yucca prefers bright light with some direct sunlight; an east- or west-facing window is ideal. It can also tolerate direct sunshine. Learn how to ensure your plant receives the correct light in this guide on understanding light for houseplants.

Water Spineless Yucca liberally during the growing season while allowing the top 2 in. of soil to dry out between waterings. Reduce watering during the cold season to keep the soil slightly moist. Avoid waterlogging as it can lead to root rot disease which can result in the eventual death of the plant. Learn more on how to water houseplants.

Average warmth with a minimum of 120C is ideal for Spineless Yucca. Learn more on temperature for houseplants.

Average room humidity is ideal for Spineless Yucca. Clean the leaves by damp-wiping with a soft cloth.

Feed Spineless Yucca with a balanced water-soluble fertilizer every 4 weeks during the growing period. Withhold feeding during the cold season as growth is minimal and feeding at this time may lead to fertilizer burn. Learn more on how to feed houseplants.

Repot Spineless Yucca during the growing season only when the plant has become pot-bound. Use fast draining soil that is rich in organic matter and a deep pot for its extensive root systems. Use a heavy pot as the plant can become top-heavy. Ensure the pot has a drainage hole(s) to prevent waterlogging which can lead to root-rot. Refresh the soil for large plants by removing the top 2-4 in. of soil and replacing with fresh soil.

Prune Spineless Yucca by removing dead and dry leaves to maintain the plant neat and tidy. To promote branching, cut back the stem and new shoots will grow just below the cut forming a crown of leaves on the trunk. The flowers can be removed at any time if desired. Cut away the flower stalk while leaving 3-4 in. of stalk attached to the trunk to avoid wounding the trunk which may result in fungal infections.

How to Propagate Spineless Yucca

Spineless Yucca can be propagated during the growing season from stem cuttings, offsets or seeds.

Propagating Spineless Yucca from stems cuttings
Take the cuttings from mature wood of Spineless Yucca as it is less likely to rot than the soft stem suttings. Cut at least 3 in. long stem cutting, place in a cool place for a few days to allow to dry out in order to enhance rooting. Insert the cutting in moist potting soil and place in a warm shaded place. Maintain the soil moist and in about 3-4 weeks, roots will develop. Allow the plant to be well established before transplanting.

Propagating Spineless Yucca from offsets
With sharp sterile scissors, seperate the offset from the mother Spineless Yucca. Pot it up in moist soil, place in a cool place and maintain the soil moist until new growth emerges. Allow the plant to be well established before transplanting.

Propagating Spineless Yucca from seeds
Begin by scarring the Spineless Yucca seeds to enhance germination. Scarring involves gently rubbing the seeds with sandpaper or a file to break (scar) the seed coating. Sow the scarred seeds 1-2 in. deep in moist free-draining (sandy) soil. Place in a warm sunny place and maintain the soil moist through out. In 1-2 weeks, germination should take place. If the seeds do not germination in 1-2 weeks, allow the soil to dry out completely and then resume watering.

The reason for plant collapse in Spineless Yucca is root-rot disease due to waterlogging of the soil.

The disease may affect the appearance of the leaves but it does not affect the health of the Spineless Yucca plant.

Spineless Yucca are highly resistant to pests but weak plants can be attacked by Scale Insects, Mealy Bugs, Moth Borers and Weevils. Isolate the plant to prevent spread to other houseplants.

Spineless Yucca (Yucca gigantea) is toxic to both humans and pets. If ingested it can cause vomiting in cats and dogs and dermatitis and liver disease in horses.