How to grow and care for German Ivy (Senecio mikanioides) Indoors 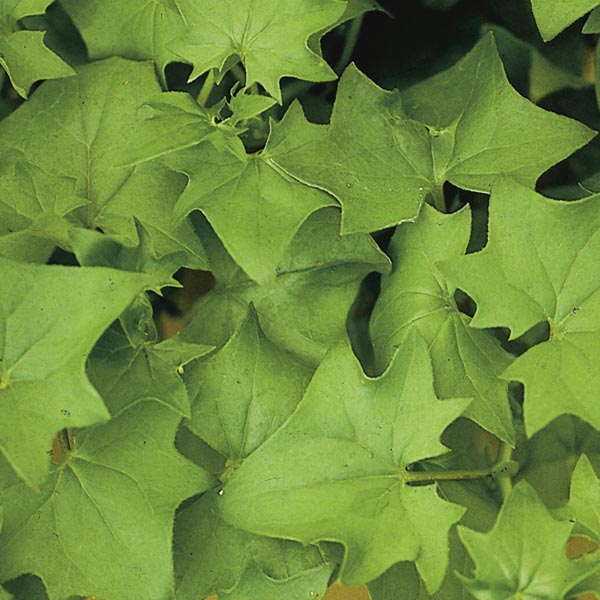 Senecio mikanioides though called German Ivy, Cape Ivy or Parlour Ivy is not a True Ivy as it is more vigorous and is less affected by warm and dry conditions than a true ivy.

Cape Ivy stems can be allowed to trail like in a hanging basket or are trained up canes or trellis.

Parlour Ivy growth when grown indoors can be controlled by regular pinching of the growing tips to encourage a bushy growth and to prevent it from becoming unruly.

Senecio mikanioides also called Delairea odorata is native to South Africa where it grows as a vine that climbs up trees and can reach a height of 5 m. in the wild.

According to Greater Wellington Pest and Weed Central, Senecio mikanioides has been found to be invasive. It is not recommended to be planted in the ground as given time, it will smoother trees.

To counter this invasive nature of Cape Ivy, always destroy the underground rhizomes before discarding as they easily resprout if left on the ground. 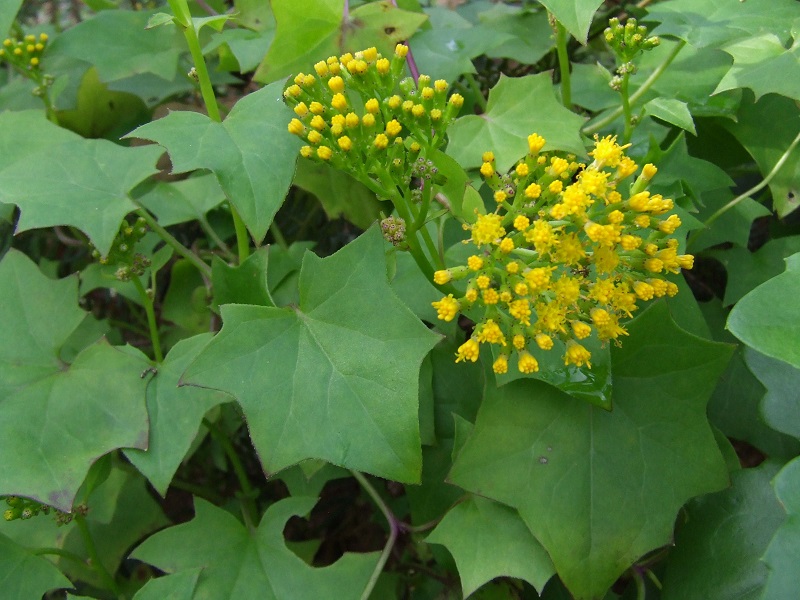 Parlour Ivy requires pruning to keep the plant neat, to reduce pest and disease infestations, to encourage a bushy, compact growth and to rejuvenate growth. Repotting is only needed every 2-3 years when the plant becomes pot-bound. Keep reading for more on these growing conditions and how to achieve them.

German Ivy grows best in medium to bright light away from direct sunlight as it can cause scorching of the leaves.

Regularly turn the pot to ensure that the Cape Ivy receives light on all sides for uniform growth.

Senecio mikanioides can also grow under a grow light where the natural light is insufficient.

Water German Ivy thoroughly during the growing season and allow the top 2 in. of soil to dry out between waterings to maintain the soil moderately moist.

Decrease watering during the cold period as growth is minimal at this time but do not allow the soil to dry out completely as it can lead to wilting and leaf drop.

Make sure that the pot has a draiange hole to prevent the soil from getting soggy as it can lead to rotting and eventual death of the plant.

German Ivy prefers average warmth with a minimum of 180C. A room temperature that is comfortable for you is ideal for this plant.

Keep the Parlour Ivy away from draughts to prevent sudden changes in temperatures which can cause sudden leaf drop.

German Ivy has no need for high humidity. Average room humidity is adequate for this plant. Occasionally clean the leaves under a stream of running water to get rid of dust and discourage pest infestation.

Feed German Ivy every 2-3 weeks during the growing season with a balanced, liquid fertilizer. Withhold fertilizer during the cold season as growth is reduced at this time.

Repot German Ivy every 2-3 years during the growing period when it becomes pot-bound. Use a pot which is 1 size larger than the current one. Ensure the pot has a drainage hole to avoid getting soggy soil as it can lead to rotting.

The best soil for German Ivy should be rich in organic matter, loose and free-draining to avoid getting soggy soil. The soil should be loose enough to allow water to drain out fast enough.

To encourage a bushy and compact growth, pinch off the growing tips. You may choose to use the tips propagate new plants.

Cut back the leggy Cape Ivy stems to rejuvenate growth.

German Ivy (Senecio mikanioides) is propagated at the beginning of the growing season from the stems. They root easily so there is no need for a rooting hormone.

The stems can be rooted in 3 ways. Keep on reading for more on these rooting methods.

How to propagate German Ivy stem-tip cuttings in soil

Take stem-tip cuttings of about 4-5 in. length from a healthy German Ivy. Ensure each cutting has 2-3 leaf nodes as this is where new growth will come from.

With a pencil or similar object make a hole in the moist rooting mix.

Insert the cutting in the previously made hole. Lightly cover the base of the cutting with the rooting mix.

Place the set up in warm, well-lit place away from direct sunlight to avoid cooking the cuttings.

Maintain the soil moist until new growth emerges and substantial growth has been observed.

Transfer the new Cape Ivy to individual pots and begin routine care. For a fuller plant, transplant several cuttings into one pot.

How to propagate German Ivy stem-tip cuttings in water

Take cuttings of about 4-5 in. length from a healthy German Ivy. Ensure each cutting has 2-3 leaf nodes as this is where new growth will come from.

Place the cuttings in a jar of plain water. Place in a warm, well-lit spot away from direct sunlight. Change the water every 5-7 days.

When a good amount of roots have formed on the cuttings, transfer the cuttings into moist potting soil.

Place the set up in a warm, well-lit place away from direct sunlight.

Maintain the soil moist until new growth has emerged and substantial growth has been observed.

Transfer the new Parlour Ivy to individual pots and begin routine care. Several cuttings can be planted in one pot for a fuller plant.

Spread the stems on the soil surface while still attached to the mother German Ivy plant. Press the stems lightly so that they touch the soil.

After some time, the stems will root at every point that they are into contact with the soil.

Once rooted, sever the stems from the mother plant. Dig them up and pot in moist soil in individual pots.

Place the new Cape Ivy in a warm, well-lit place and maintain the soil moist until they are well established after which you can begin routine care. 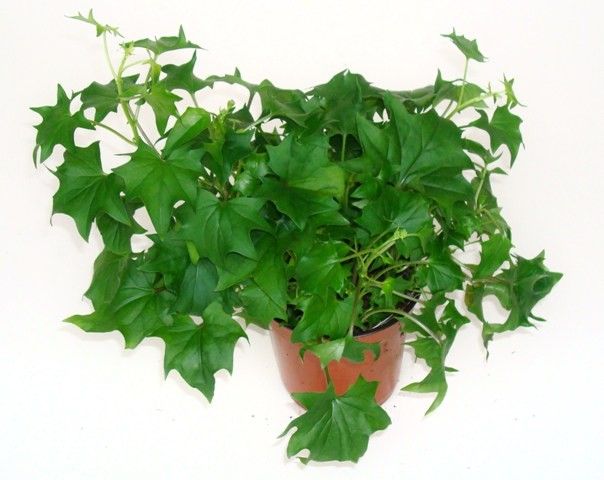 German Ivy (Senecio mikanioides) problems indoors are mainly due to cultural faults in watering and lighting. The problems include leggy growth, curled leaves, dropping leaves, pests and diseases among others. Read on for more on these problems,their remedies and solutions.

Brown leaves and curled edges in German Ivy are caused by overwatering or too wet soil (soggy soil). Ensure the soil is free-draining and the pot has a drainage hole.

Water the Cape Ivy only when the top 2 in. of soil have dried out to maintain the soil moderately moist during the growing seasn.

Significantly reduce watering during the cold season to keep the soil slightly moist as growth is reduced at this time.

Drooping leaves in German Ivy are due to underwatering resulting in too little moisture in the soil.

This means that the leaves loss more water to the air than they are getting from the soil which causes them to lose their turgidity (stiffness) and thus they droop.

Water the Cape Ivy immediately it starts to droop and it should perk up. Do not allow the soil to dry out completely but only slightly before watering again.

Leggy growth and undersized leaves in German Ivy are caused by too little light as it grows best in medium to bright light away from direct sunlight.

Common pests in German Ivy are Mealy Bugs and Aphids. Isolate the affected plant to prevent spread to other houseplants and treat it appropriately for the pests.

Common diseases in German Ivy are leaf spot and root-rot which are prevalent in too wet conditions.

Isolate the affected plant to prevent spread to other houseplants and treat it appropriately for the diseases.

To reduce disease infestation, ensure that there is good air circulation for the Cape Ivy at all times.

Also ensure that the soil is free-draining and the pot has a drainage hole to prevent soggy soil.

German Ivy (Senecio mikanioides) is toxic to both humans and pets as indicated by ASPCA. If ingested, it can cause vomiting, diarrhea and abdominal pains. Keep it away from the reach of children and pets.