How to grow and care for Ponytail Palm Indoors 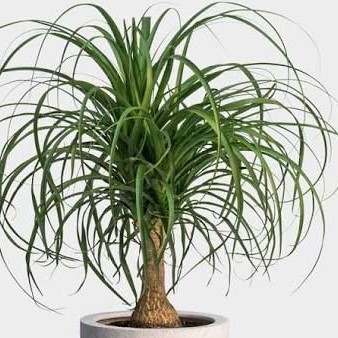 Ponytail Palm also called Elephant Foot is an easy to grow houseplants that does not require a lot of attention. It is ideal for a beginner or the forgetful. It has a large, swollen bulb which stores water that resembles an elephant's foot and hence the common name "Elephant Foot". A thin trunk arises from this bulb and is topped by a plume of long strap-like leaves which gives the plant its common name "Ponytail Palm". Though called a palm, Ponytail Palm is not a true palm. It is a member of the Agave family along with Yucca and Lily plants. Ponytail Palm is a slow-growing succulent which requires very bright light with some direct sunlight and moderately moist free-draining soil. It does not like soggy soil. Under the right conditions Ponytail Palm can grow to a height of 6 ft or more. Ponytail Palm is native to the states of Tamaulipas, Veracruz and San Luis Potosi in eastern Mexico.

How to Grow Ponytail Palm

Ponytail Palm prefers bright light with some direct sunlight. It can also tolerate direct sunshine. Learn how to ensure your plant receives the correct light in this guide on understanding light for houseplants.

Water Ponytail Palm liberally during the growing season while allowing the top 2 in. of soil to dry out between waterings. Reduce watering during the cold season to keep the soil slightly moist. Avoid waterlogging as it can lead to rotting of the bulb. Learn more on how to water houseplants.

Average warmth with a minimum of 150C is ideal for Ponytail Palm. Learn more on temperature for houseplants.

Average room humidity is ideal for Ponytail Palm. Mist the leaves occasionally and clean them by damp-wiping with a soft cloth.

Feed Ponytail Palm with a balanced water-soluble fertilizer every 4 weeks during the growing period. Withhold feeding during the cold season as growth is minimal and feeding at this time may lead to fertilizer burn. Learn more on how to feed houseplants.

Repot Ponytail Palm during the growing season only when the plant has become pot-bound. Use fast draining soil that is rich in organic matter. The pot should allow 1 in. of space between the plant's trunk and the rim of the pot. Ensure that the trunk remains at the same soil level as it was in previous pot and that the bulbous part is not covered under soil to avoid rotting. Ensure the pot has a drainage hole(s) to prevent waterlogging which can lead to rotting. Refresh the soil for large plants by removing the top 2-4 in. of soil and replacing with fresh soil.

Prune Ponytail Palm by removing dead and dry leaves to maintain the plant neat and tidy. Avoid wounding the trunk as it can result in fungal infections.

How to Propagate Ponytail Palm

Ponytail Palm is not easy to propagate but can be propagated from offsets (pups) at the beginning of the growing season.

Propagating Ponytail Palm from offshoots (pups)
Allow the pups to grow to a length of about 4 in. or more to ensure best chance of survival. Remove soil around the base of the Ponytail Palm to expose where the pup joins the mother. With a sterilized sharp knife, cut the pup away. Plant the pup in moist potting mixture which is sand-based and free-draining. Cover the set up with a clear plastic bag in order to create humid conditions that are necessary for rooting. Keep the soil surface moist through out until pup is well established.

Brown leaf tips in Ponytail Palm are due to two reasons. One reason is underwatering or overwatering; water Ponytail Palm liberally during the growing season while allowing the top 2 in. of soil to dry out between waterings. Reduce watering in the cold season to keep the soil slightly moist but never soggy. The second reason is overfeeding which leads to fertilizer burn; Ponytail Palm is a slow-grower and therefore does not require heavy feeding. Feed Ponytail Palm monthly during the growing season and withhold feeding during the cold season. Snip off the brown tips with a sharp sterilized scissors to keep the plant neat.

The lower leaves in Ponytail Palm turn brown as the plant ages. Pull out the dry leaves to maintain the plant neat as new leaves are growing from the top of the trunk.

Ponytail Palm are highly resistant to pests but weak plants can be attacked by Scale Insects, Mealy Bugs and Spider Mites.

Ponytail Palm (Beaucarnea recurvata) is non-toxic to both humans and pets. It is safe to grow indoors.