How to grow and care for Scarlet Star Bromeliads Indoors 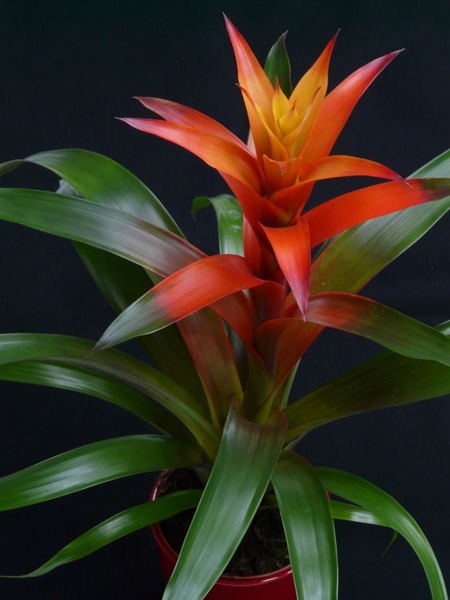 The Scarlet Star is one of the Bromeliads grown as a houseplant for the beauty of the bright-red or orange showy flower-heads with a central cluster of small white flowers. The leaves are backward-arching and smooth-edged, about 1.5 ft long. They are typical Bromeliads with leathery, arching leaves and a distinct central 'vase' from which a stout stalk bearing a bold flower-head emerges. A plant may take several years to reach the flowering stage but the display may last several months. Once the flower-head fades, the rosette of leaves begins to die and is replaced by offsets at the base. The display of the flower head is due to the presence of long-lasting showy bracts; true flowers are small and short-lived.

Scarlet Star Bromeliads prefer bright light but away from direct sunlight. Learn how to ensure your plant receives the correct light in this guide on understanding light for houseplants.

Like with other rosette Bromeliads, Guzmania Bromeliads require the central 'vase' to be filled with water at all times. Empty and refill the 'vase' regularly to prevent growth of bacteria which may cause the water to become smelly. Use only chlorine-free water as they are sensitive to chlorine and other chemicals that may be dissolved in water. Water the soil only when it dries to keep the roots moist; avoid waterlogging as it can lead to root-rot. Allow good air circulation to prevent pests and disease infestation.

Average warmth with a minimum of 150C is ideal for Scarlet Star Bromeliads. To bring the plant to flower may require temperatures above 260C.

Feed Scarlet Star Bromeliads with a liquid fertilizer (foliar feed) once every month during the growing season. Do not feed during the cold season as growth is minimal.

Repotting Scarlet Star Bromeliads is not necessary as their roots are tiny and are unlikely to fill the pot. Pot these Bromeliads in a shallow heavy pot to prevent them from toppling over as they can become top-heavy. Also provide support to help keep it upright.

Pruning Scarlet Star Bromeliads involves removal of dead leaves to keep the plant neat and tidy and to allow adequate room for the new plants to grow. Remove the dead foliage by cutting at the base with a clean knife or a pair of scissors.

Scarlet Star Bromeliads are propagated from offsets appearing at the base of the plant. When the offset is several months old, remove it with some roots attached and plant shallow in free-draining bark soil. Place the set up in a warm shaded place until the plant is well established. Ensure the plant is well supported; due to their small roots it may topple over. Pot in a shallow heavy pot.

Growing Scarlet Star Bromeliads where air is too dry will cause brown leaf tips. Employ these techniques to raise humidity.

Inadequate light for Scarlet Star Bromeliads is the cause of dark, soft, drooping, long leaves. Move it to a brighter spot; it prefers bright light but away from direct sunlight.

Common pests in Guzmania Bromeliads are Scales and Mealy Bugs. Isolate the affected plant to prevent spread to other houseplants and treat appropriately.

Root-rot Disease due to waterlogging is the reason if Scarlet Star Bromeliad has not flowered. If it has flowered then rotting and death of rosette which bore flower-stalk is natural to give room for the new plants. Remove the dead foliage by cutting at the base with a clean knife or a pair of scissors.

Scarlet Star (Guzmania) Bromeliads are non-toxic to humans and pets. The plants are safe to grow indoors. However, the leaves bear short spines which may cause physical injury if handled with bare hands; always handle with gloves to prevent injury. 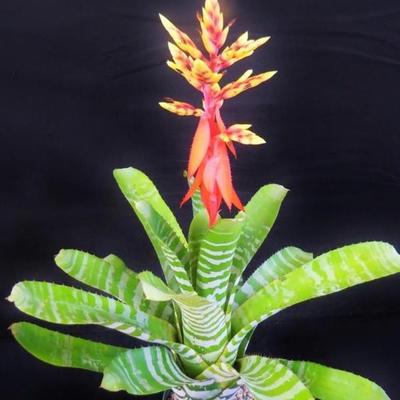 Bromeliads are a unique group of plants which require a somewhat different care routine. They are grown for the beauty of their foliage as well as the blooms. Read more »