How to grow and care for Dracaena deremensis Indoors Dracaena deremensis is a slow growing houseplant whose foliage is dark-green with one or more longitudinal stripes in a different color and is easy to grow. The plant can reach a height of 4 ft or more when mature. The leaves are about 1.5 ft long and may die if exposed to excessive sunlight. As it grows, it sheds its lower leaves, leaving a bare stem with a cluster of leaves at the top. A new plant may drop a few leaves as it adjusts to its new home. Dracaena deremensis is suitable as a stand alone plant or as part of a mixed group, with the various leaf patterns complementing and overlapping one another.

How to Grow Dracaena deremensis

Dracaena deremensis prefers light shade, an east- or west-facing window is ideal. It can also grow in shade but the the leaves will be much narrower. Avoid direct sunlight as it can lead to sunburn brown spots on the leaves. Learn more on how to ensure your plant receives the correct light in this guide on understanding light for houseplants.

Keep soil moist at all times for Dracaena deremensis but reduce watering in the cold months. Avoid overwatering as it may lead to root-rot. Use water at room temperature that is free of chlorine, flourides and other chemicals to prevent brown leaf tips. Learn more on how to water houseplants.

Average warmth with a minumum of 150C is ideal for Dracaena deremensis. Find out more on temperature for houseplants.

Average room humidity is ideal for Dracaena deremensis. Mist the leaves occasionally and clean them by damp-wiping with a soft cloth to get rid of dust. If the air is too dry especially where temperature is high raise humidity by more frequent misting or set the pot on a wet pebble tray.

Feed Dracaena deremensis monthly during the growing period with a balanced water-soluble fertilizer. Withhold feeding in the cold season as growth is minimal and feeding at this time can lead to fertilizer burn. Regularly flush out accumulated salts in the soil by running a stream of water through the soil until the water comes out through the drainage hole. Allow it to run for a few minutes and repeat several times. Find out more on feeding houseplants.

Repot Dracaena deremensis at the beginning of the growing season when roots begin to grow through the drainage holes; the plant prefers to be slightly root-bound. Use a pot 1 size larger and one that has drainage holes. The soil should be free-draining and rich in organic matter. Never allow the roots to sit in waterlogged soil as it may lead to root-rot.

How to Prune Dracaena deremensis

Pruning Dracaena deremensis involves removal of dead and yellow leaves to maintain the plant neat and tidy. Prune thin or bare stemmed plants during the growing season by cutting off the top crown of leaves along the stem. New leaves will sprout just below the cut. The crown of leaves can be used to propagate a new plant by sticking it in moist soil. Reduce the leaves size to minimize water loss. Learn more on how to prune houseplants.

How to Propagate Dracaena deremensis

Dracaena deremensis can be propagated by air layering, from stem cuttings or by use of the crown from old leggy canes.

Air layering
This consists of notching the stem of a healthy Dracaena deremensis plant, coating the notch with a rooting hormone, surrounding the area with damp moss and then covering it with a polythene film or clear plactic wrap. After the roots have formed sever the stem just below the covered part, remove the polythene and carefully pot the rooted cutting. New shoots will sprout from the shortened stem of the old plant.

From the top crown of leaves
Remove the top crown of leaves from a Dracaena deremensis plant bearing about 3 in. of stem, apply a rooting hormone and stick it in moist free-draining rooting soil. Place the set in a warm shaded place. Rooting will occur in about 3-6 weeks. When new growth is observed, the plant can be transplanted.

From stem cuttings
Take 2-3 in. long stem cuttings from a Dracaena deremensis plant, dip the lower cut-end in a rooting hormone and stick it in moist free draining rooting soil. Place the set up in a warm medium lit place. Roots will develop in about 3-6 weeks. Once there is new growth, the plant can be transplanted.

There are four reasons for these in Dracaena deremensis. One is dry air; raise humidity, by more frequent misting or set the pot on a wet pebble tray. Two is underwatering; maintain the soil moist at all times and do not let the soil to dry out. Three is chemical accumulation in the soil; use chemical free water and regularly flush out salts from the soil. Four is cold draughts; place the plant away from draughts.

This is a natural process in Dracaena deremensis, as the plant matures it sheds the lower leaves. Each lower leaf turns yellow and dries leaving a crown of leaves on top of the cane-like stem.

If the temperature is too low Dracaena deremensis leaves become soft and curled and the edges turn brown. Maintain an average room temperature and protect the plant from cold draughts.

Dracaena deremensis will form brown leaf spots if it is underwatered. Maintain the soil moist at all times and never allow the soil ball to dry out.

Direct sunlight will cause bleached dry patches on the leaves of Dracaena deremensis. Move the plant to a shadier spot or protect it from direct sunlight.

Dracaena deremensis is prone to root-rot which is promoted by waterlogging. Ensure there is free drainage of both the soil and the pot and also reduce watering in the cold season. Keeping Dracaena deremensis too cold will also kill it; maintain average room temperature and protect it from cold draughts. Another reason for the death of Dracaena deremensis is accumulation of salts in the soil; regularly flush out salts from the soil.

Common pests in Dracaena deremensis are Mealy Bugs, Scale Insects and Spider Mites. Isolate the affected plant to prevent spread to other plants.

Dracaena deremensis is toxic to both humans and pets. The leaves contain alkyds. If ingested they may cause vomiting and excessive salivation. 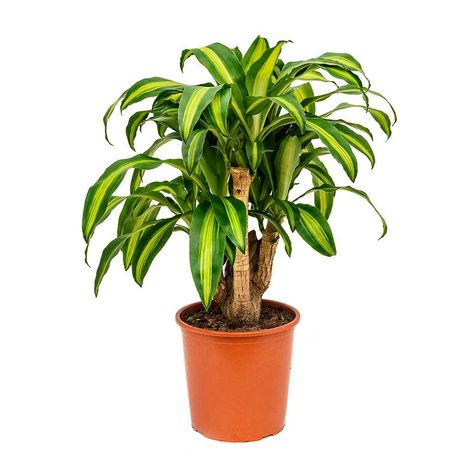 Dracaena plants are attractive houseplants which add a splash of color in any indoor space. They are easy to grow and propagate. Read more »