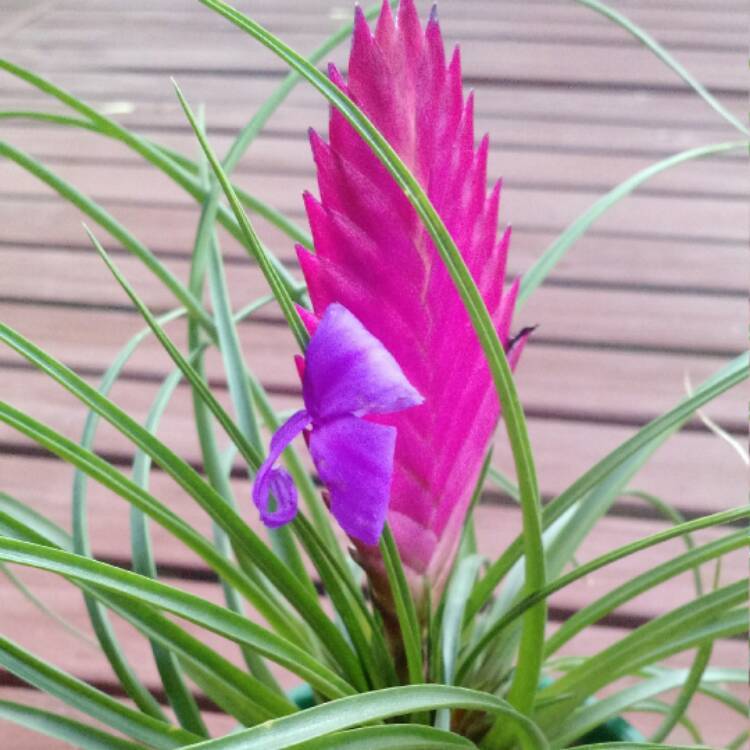 The usual pattern is a rosette of leathery, strap-like foliage and flower-head which arises on a stalk from the cup-like center of rosette.

The leaves are covered with specialized cells called trichomes capable of rapidly absorbing water and nutrients that gathers on them.

The Blue-flowered Torch Bromeliads flower when mature usually after about 3 years. The flower-head is about 9-12 in. long and can last up to 3 months.

Once the flower-head fades, the rosette of leaves begins to die and is replaced by offsets (pups) at the base.

The display of the flower head is due to the presence of long-lasting showy bracts; true flowers are small and short-lived.

Pink Quill Bromeliads are native to the American Jungle, where they dwell among the Orchids in trees or on the forest floor.

The most popular Green Tillandsia are Tillandsia lindenii (Blue-flowered Torch) and Tillandsia cyanea which has a more compact flower-head with flowers which are all-blue. 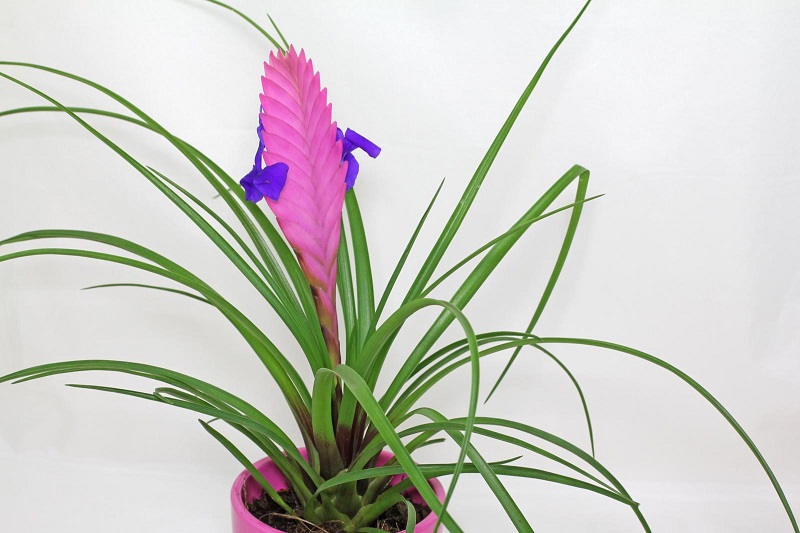 Blue-flowered Torch Bromeliads require regular pruning to keep them neat as well as provide space for the growth of pups. Repotting is not necessary as they are slow growers and once they flower, they die and leave behind pups. Keep reading for more on these growing conditions and how to achieve them.

Pink Quill Bromeliad grows best in bright light but away from direct sunlight. It can also grow under a grow light if natural light is not sufficient.

Turn the pot regularly to ensure the plant receives light on all sides for even growth. Check out this guide on understanding light for houseplants.

Like with other rosette Bromeliads, Pink Quill Bromeliads require the central 'vase' to be filled with water at all times. Empty and refill the 'vase' regularly to prevent growth of bacteria which may cause the water to become smelly.

Use only chlorine-free water as Blue-flowered Torch Bromeliads are sensitive to chlorine and other chemicals that may be dissolved in water.

Water the soil only when it dries to keep the roots moist; avoid soggy soil as it can lead to root-rot disease. Allow good air circulation to prevent pests and disease infestation.

Pink Quill Bromeliad requires a humid enviroment. If the humidity is too low, the plant will respond with brown leaf tips.

To raise humidity, set the pot on a wet pebbele tray or use a cool mist humidifier. Check out these techniques on how to raise humidity for houseplants.

Ensure there is good air circulation to prevent pests and disease infestation.

Feed Pink Quill Bromeliad with a liquid fertilizer (foliar feed) every 2 weeks during the growing season. Do not feed during the cold season as growth is minimal and it may cause fertilizer burn in your bromeliad.

Repotting Pink Quill Bromeliad is not necessary as it grows slowly and once mature they flower and die leaving behind pups which can be used to propagate new plants.

The best soil for Pink Quill Bromeliad should be rich in organic matter, loose, free-draining bark soil to prevent it from getting soggy while providing the required nutrients.

Pruning Pink Quill Bromeliad involves removal of dead leaves to keep the plant neat and tidy and to allow adequate room for the new plants to grow. Remove the dead foliage from by cutting at the base with a clean knife or a pair of scissors.

Related: 10 Types of Bromeliads for Growing Indoors with Pictures and Care Guide

Pink Quill Bromeliads can be propagated from offsets (pups) appearing at the base of the plant.

How to propagate Pink Quill Bromeliads from offsets (pups)

When the Pink Quill Bromeliad offset (pup) is several months old or 1/3 to 1/2 the height of mother plant, cut it away from the mother plant.

Ensure the offset has some roots attached to it and plant the offset shallowly in loose, free-draining bark soil.

Use a shallow, heavy pot for the offset to prevent it from toppling over as it can become top heavy.

Place the set up in a warm, shaded place until the new Blue-flowered Torch Bromeliad is well established.

Ensure the plant is well supported as it has a small root system and it may topple over.

Related: How to Propagate Bromeliads from Pups | Bromeliad Propagation from Pups 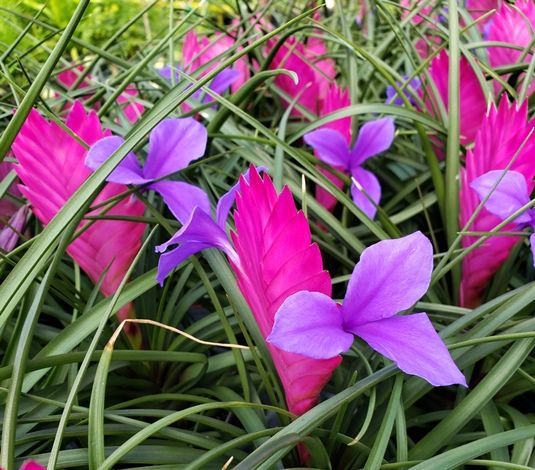 Pink Quill Bromeliads problems indoors are due to cultural faults in humidity, lighting and watering. These problems include brown leaf tips, drooping leaves, plant death, leaf spots, pests and diseases among other. Read on for more on these problems, their remedies and solutions.

Inadequate light for Pink Quill Bromeliad is the cause of dark, soft and drooping leaves as it grows best in bright light.

Move the Blue-flowered Torch Bromeliad to a brighter spot as it prefers bright light but away from direct sunlight. It can also grow under a grow light where natural light is not adequate.

If the Pink Quill Bromeliad has not flowered, then root-rot brought about by soggy soil is the cause of its death. Read more on root-rot disease and how to deal with it.

If the Blue-flowered Torch Bromeliad has flowered, then rotting and death of rosette which bore the flower-stalk is natural to give room for the new plants.

Remove the dead foliage by cutting at the base with a clean knife or a pair of scissors to keep the plant neat.

Pink Quill Bromeliads brown leaf tips are caused by too dry air; too low humidity. To raise humidity, set the pot on a wet pebble tray or use a cool mist humidifier. Check out these techniques on raise humidity for houseplants.

Pale, brown patches on the leaves

Pink Quill Bromeliad pests; Scales and Mealy Bugs. Isolate the affected Bromeliad to prevent spread to other houseplants and treat it appropriately for the pests.

Pink Quill Bromeliads (Green Tillandsia) are non-toxic to humans and pets. The plants are safe to grow indoors.

However, the leaves bear short spines which may cause physical injury if handled with bare hands. Always wear gloves when handling Blue-flowered Torch Bromeliad to prevent injury.