How to grow and care for Pilea cadierei (Aluminium Plant) Indoors 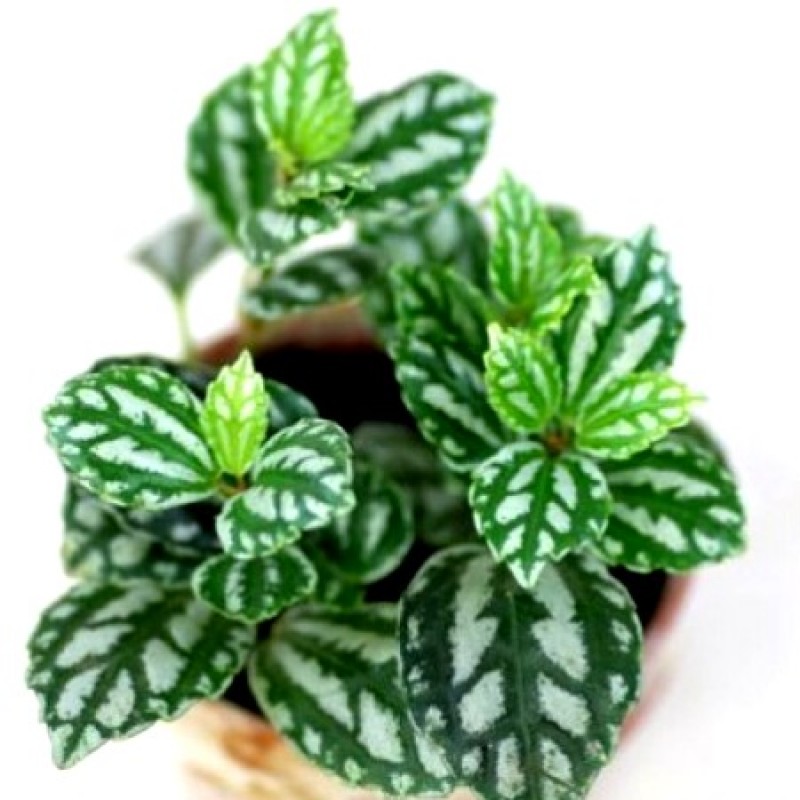 The leaves in Pilea cadierei are generally opposite on the stems and they are clearly divided into petiole and leaf blade.

With age, Pilea cadierei becomes leggy and unattractive. Replace the leggy plant with young vibrant plants which are easily propagated from stem cuttings.

Pilea cadierei is monoecious which means that the male and the female flowers are on seperate plants.

The Pilea cadierei is a low growing plant which grows to a height of 1 ft only and 18 in. wide.

Pilea cadierei is native to China and Vietnam. The species name "cadierei" is in honour of the 20th century botanist R.P. Cadiere. 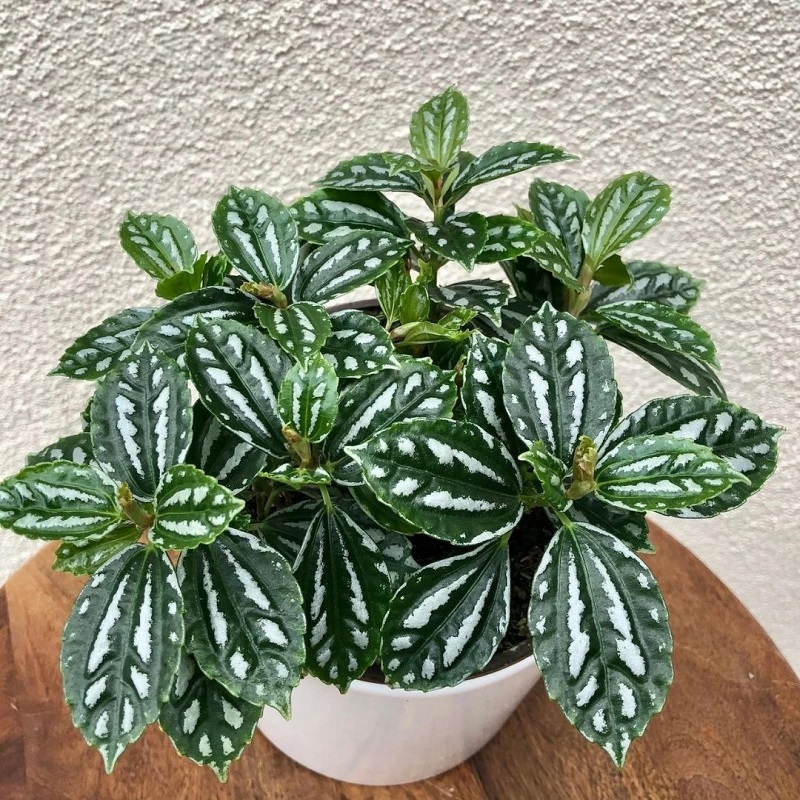 Pilea cadierei grows best in bright, indirect light inorder to maintain the leaf color. It can also grow under a grow light where the natural light is not adequate.

Keep Pilea cadierei away from direct sunshine as it can lead to scorching of the leaves. Inadequate light for your Pilea cadierei leads to a thin and leggy plant. Check out this guide on understanding light for houseplants.

How to Water Pilea cadierei

Water Pilea cadierei thoroughly during the growing season and allow the top 1-2 in. of soil to dry out between waterings.

Reduce watering during the cold season to keep the soil slightly moist as growth is minimal. Read more on how to water houseplants.

Ensure the pot for Pilea cadierei has a drainage hole to avoid getting soggy soil as it can lead to root-rot disease and eventual death of your plant.

Average warmth with a minimum 150C is ideal for your Pilea cadierei. Protect the plant from cold draughts to avoid sudden drop in temperature.

Pilea cadierei has no need for high humidity; average room humidity is adequate for this plant.

Where the room temperatures are too high, set the pot on a wet pebble tray or use a cool mist humidifier to raise humidity. Check out these techniques on how to raise humidity for houseplants.

Feed Pilea cadierei with a balanced water-soluble fertilizer every 4-5 weeks during the growing period.

Withhold feeding during the cold season as growth is minimal and feeding at this time may lead to fertilizer burn. Read more on how to feed houseplants.

How to Repot Pilea cadierei

Repot a young Pilea cadierei annually at the beginning of the growing season as the extensive root system is known to break the pots if restricted.

Use a pot two sizes larger than the current one and ensure the pot has a drainage hole to prevent the soil from getting soggy as it can lead to root-rot disease and eventual death of your plant.

How to Prune Pilea cadierei

To control the height of Pilea cadierei and encourage bushyness, pinch the growing tips. Read more on how to prune houseplants.

Pilea cadierei propagation can be done during the growing period from stem cuttings.

How to propagate Pilea cadierei from Stem Cuttings

Pilea cadierei stem cuttings root easily so there is no need for rooting hormone.

Take a stem cutting of about 3-5 in. from a healthy Pilea cadierei and ensure it bears at least two sets of leaves.

Insert the cutting in moist, free-draining soil and place in a warm, well-lit place.

Maintain the soil moist through out until new growth emerges. Allow the new Pilea cadierei to be well established before transplanting after which you can begin routine care. 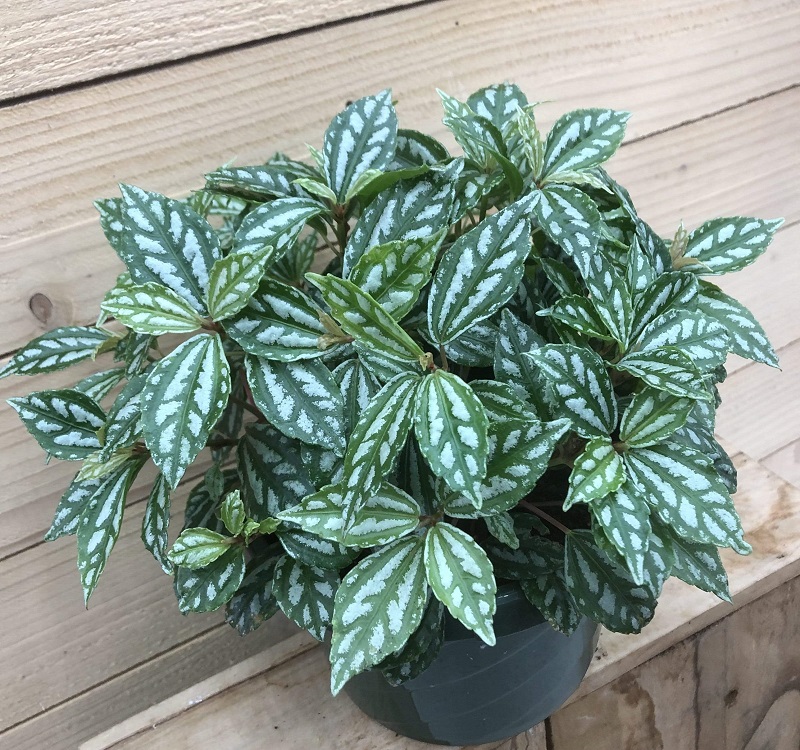 Inadequate light is the cause of discolored leaves with brown tips and edges in Pilea cadierei.

Move your Pilea cadierei to a brighter spot. Pilea cadierei prefers bright, indirect light. It can also grow under a grow light where the natural light is not adequate. Check out this guide on understanding light for houseplants.

Move the plant to a brighter spot where it will receive bright, indirect light to prevent it from growing towards the light source. It can also grow under a grow light where the natural light is not adequate.

The cause of brown and shrivelled leaf tips in Pilea cadierei is too dry air (low humidity).

The reason for brown spots and yellow leaves in Pilea cadierei is exposure to direct sunlight. Brown leaf spots are sunscorch marks.

Move the plant to a shaded spot or protect it from direct sunlight to prevent sunscorch marks.

Pilea cadierei diseases; root-rot disaese due to overwatering and Blight which begins in one leaf and turns it brown and rotten.

Remove the affected stem to prevent spread to the rest of the plant and treat the plant appropriately for the disease.

Pilea cadierei pests; Spider Mites and Mealy Bugs. Isolate the affected plant to prevent spread to other houseplants and treat it appropriately for the pests.

Pilea cadierei (Aluminium Plant) is non-toxic to humans and pets. The plants are safe to grow indoors.