How to Grow and Care for Weeping Fig (Ficus benjamina) Indoors 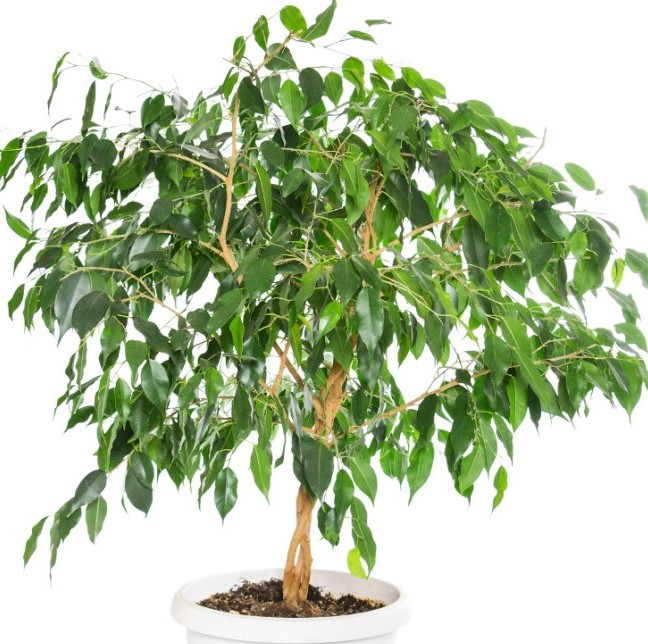 Weeping Fig (Ficus benjamina) is a popular plant due to its elegant growth and tolerance to poor growing conditions but it does not like sudden changes in light conditions.

Benjamin Fig bears gracefully drooping branch-lets and glossy leaves, oval with an acuminate tip. The young foliage is light green and slightly wavy, the older leaves are green and smooth.

The bark is light gray and smooth but the bark of young branches is brownish.

When grown indoors, Weeping Fig can grow to a height of 6 ft but in the natural habitat it grows into a large tree about 20-30 ft.

Ficus benjamina is native to Asia and Australia. In its native habitat, it produces small fruits favored by some birds like doves and pigeons. The ripe figs are orange-red and are edible.

According to the NASA Clean Air Study, Weeping Fig (Ficus benjamina) was found to be effective in cleaning the indoor air of common household toxins like xylene, toulene and trichloroethylene.

There are many varieties of Weeping Fig like Variegata, Starlight, Nuda, Hawaii, Natasha and Gold Princess among others. 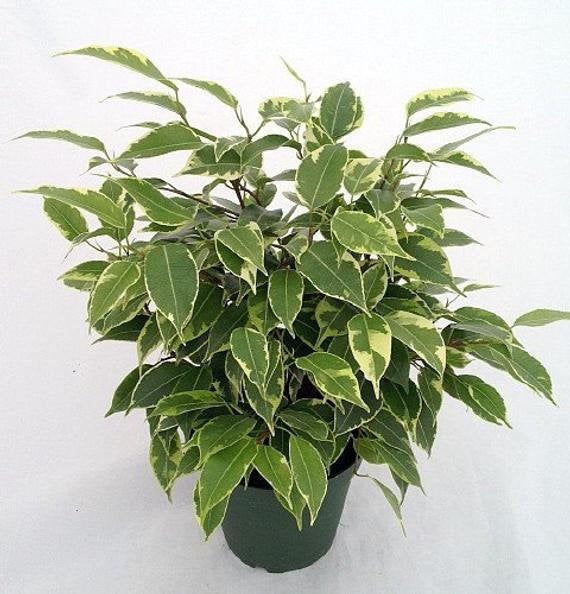 Benjamin Fig requires regular pruning to keep it neat and also encourage a bushy growth. Repotting is only needed when it becomes pot-bound. Keep reading for more on these growing conditions and how to achieve them.

Weeping Fig grows best in bright light with some direct sunlight. It can also grow under a grow light where natural light is inadequate.

The plant can adapt to lower light but it will grow much slower. However, the variegated Benjamin Figs require bright light to maintain the variegation.

Ficus Tree is very sensitive to sudden changes in lighting and it may shed all the leaves, therefore avoid moving it to a new location before acclimating it gradually. Check out this guide on understanding light for houseplants.

Water Weeping Fig liberally until the water comes out through the drainage hole during the growing season and allow the top 2-3 in. of soil to dry out between waterings to keep the soil moderately moist.

Reduce watering during the cold season to maintain the soil barely moist as growth is reduced at this time. Read more on how to water houseplants.

Ensure the pot has a drainage hole to prevent the soil from getting soggy as it can lead to sudden leaf drop and root-rot disease.

The best temperature for growing Weeping Fig indoors is an average warmth with a minumum of 120C. Keep it away from cold draughts to prevent sudden drop in temperature as it can lead to leaf drop. Read more on understanding temperature for houseplants.

Average room humidity is ideal for Weeping Fig. It has no need for high humidity.

However, where the air is too dry especially where temperature is high, set the pot on a wet pebble tray or use a cool mist humidifier to raise humidity. Read more on how to raise humidity for houseplants.

Occasionally clean the leaves by washing them under a steady stream of water from a hose to get rid of dust and discourage pest infestation. Read more on how to clean houseplants.

Feed Weeping Fig monthly during the growing period with a balanced, water-soluble fertilizer. Withhold feeding during the cold season as growth is minimal and feeding at this time can lead to fertilizer burn. Read more on how to feed houseplants.

Repot Weeping Fig at the beginning of the growing season only when it has become pot-bound.

Avoid frequent repotting as it prefers to be pot-bound. Repot only when it has outgrown its current pot; when roots begin to grow through the drainage holes.

Use a pot 1 size larger and one that has a drainage hole to avoid getting soggy soil as it can lead to root-rot disease.

Use a heavy pot to prevent it from toppling over as the plant can become top-heavy.

Never allow the roots of Benjamin Fig to sit in soggy soil as it may lead to leaf drop and root-rot.

For the large plants which may be difficult to handle, annually replenish the top 2-4 in. of soil with fresh soil.

The best soil for Weeping Fig should be rich in organic matter and free-draining to prevent it from getting soggy while providing the required nutrients.

Most multi-purpose potting mixes are ideal for this plant. Buy quality potting mix from Amazon for Benjamin Fig.

When the plant has reached maximum height or it has become leggy, cut back the branches to rejuvenate growth for a bushy growth.

The foliage emating from pruning can be used to propagate new plants. Read more on how to prune houseplants.

Weeping Fig (Ficus benjamina) can be propagated during the growing season from stem-tip cuttings.

How to propagate Weeping Fig from stem-tip cuttings

Take stem-tip cuttings of about 6 in. long from a healthy Weeping Fig. Strip off the lower lower leaves but ensure that the cutting has at least 2 sets of leaves on top.

Dip the cut end of the cutting in a rooting hormone to enhance rooting.

Insert the cutting in moist rooting soil. Ensure the rooting container has adequate drainage to avoid getting soggy soil.

To hasten rooting of the cutting, create a mini-greenhouse by covering the set up with a clear polythene sheet or bag.

Ensure the leaves of the cutting do not touch the sheet or bag too much by propping it up with sticks.

Place the set up in warm, well-lit spot and maintain the soil moist through out until new growth emerges. New growth indicates that the cutting has rooted.

In about 2-4 weeks, rooting of the cutting will have taken place.

Gradually over a period of two weeks, remove the plastic bag cover to acclimatize the new plant.

In 4-6 months, there will be adequate root development and and normal care for the new Benjamin Fig can begin. 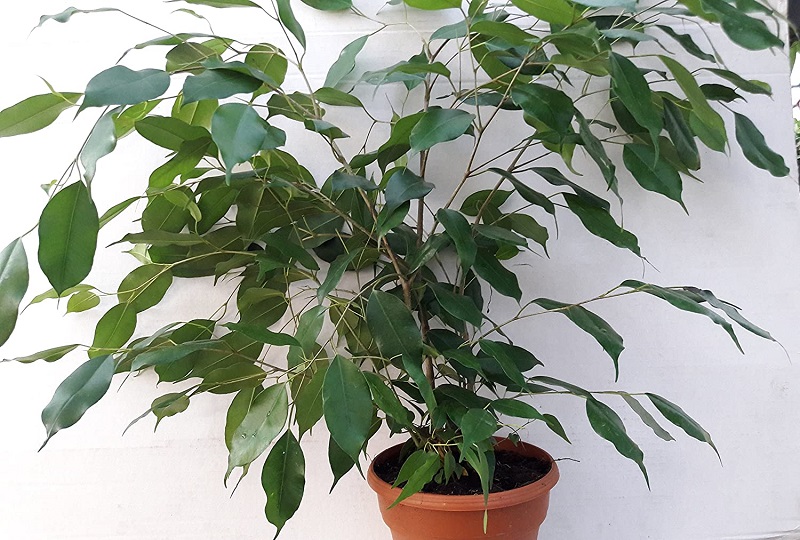 Weeping Fig (Ficus benjamina) problems indoors are caused by cultural faults (improper care). These problems include leaf drop, yellow leaves, pests and diseases among others. Continue reading for more on these problems and how to fix them.

Ensure that the pot has a drainage hole and the soil is free-draining to prevent the soil from getting soggy.

The second possible cause of leaf drop in Weeping Fig is low temperature.

Protect Benjamin Fig from cold draughts to avoid a drop in temperature to maintain an average warmth with a minumum of 120C.

The third possible cause of leaf drop in Weeping Fig is too little light.

Move Ficus Tree to a brighter spot and ensure it is receiving bright light away from direct sunshine. Read more on understanding light for houseplants.

The fourth possible cause of leaf drop in Weeping Fig is overfeeding.

Do not feed Benjamin Fig during the cold season as growth is minimal at this time. Read more on how to feed houseplants.

Loss of the lower leaves

Loss of lower leaves is a normal occurence in Weeping Fig. As the plant matures, it losses the lower leaves leaving a bare stem with a crown of leaves at the top.

Cut back the stem at the desired height at the beginning of the growing season to rejuvenate growth. New growth will emerge at a point below the cut.

Yellowing leaf edges in Weeping Fig are due to underfeeding. Feed the plant monthly with a balanced, water-soluble fertilizer during the growing period. Read more on how to feed houseplants.

Isolate the affected plant to prevent spread to other plants and treat with Neem oil or Insecticidal soap. Keep the plant properly pruned at all times to reduce the hiding places for these pests.

Weeping Fig is prone to root-rot disease which is enhanced by soggy soil. Ensure there is free drainage of both the soil and the pot and also reduce watering during the cold season.

Weeping fig (Ficus benjamina) is toxic to both humans and pets as indicated by ASPCA. The foliage contains latex which may be of particular concern to latex allergy sufferers. Keep the plant away from latex sensitive persons.

If parts of the Weeping Fig are ingested, it can cause nausea, vomiting, diarrhea and abdominal pains. However, the fruits are edible. 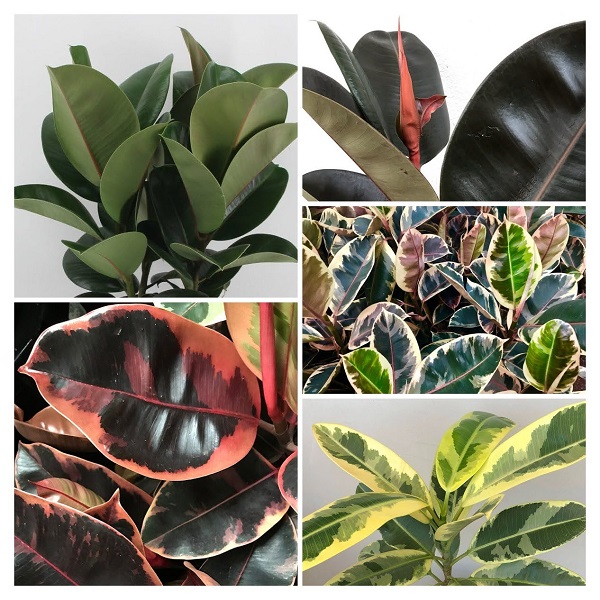 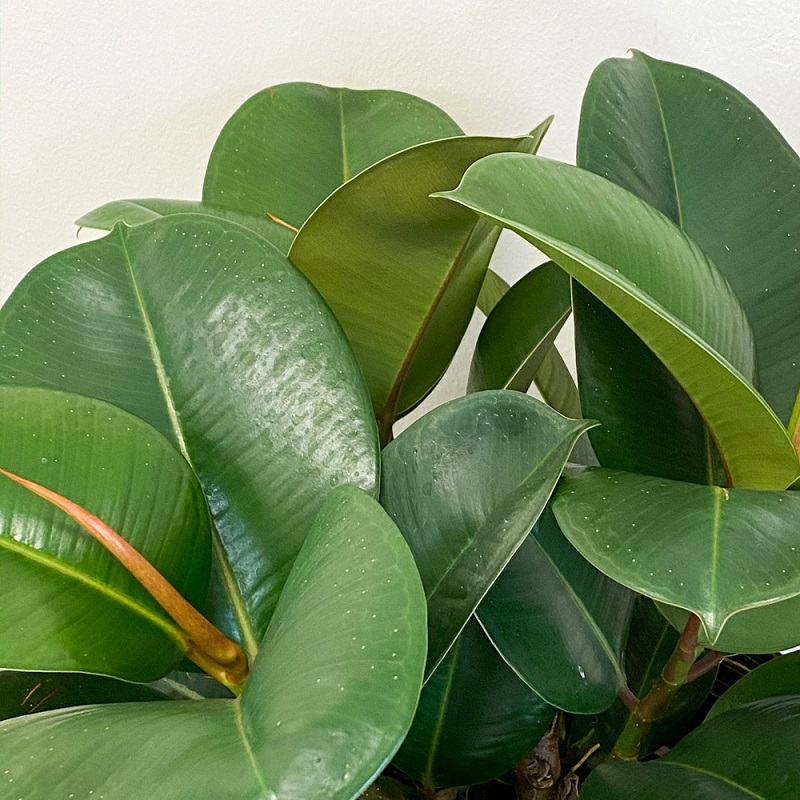