How to grow and care for Bush Lily (Clivia miniata) Indoors 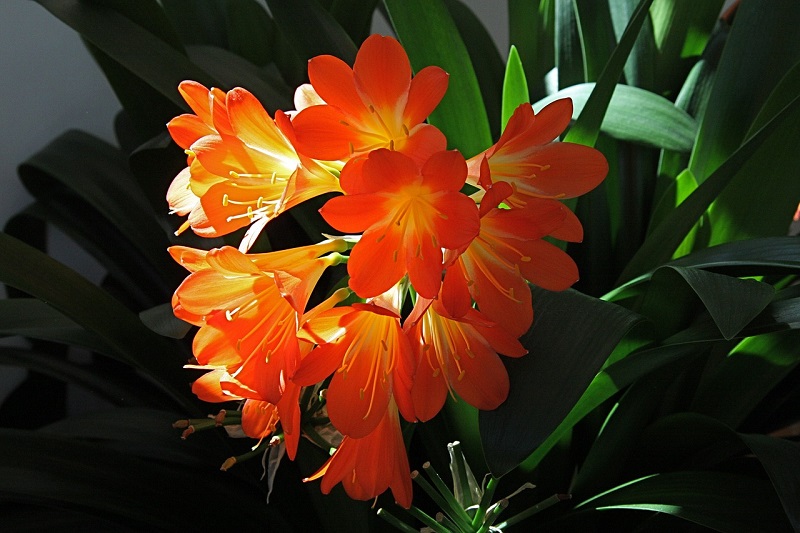 Bush Lily also called Natal Lily is one of the easy to grow flowering plants which bears large clusters of flowers that easily adapts to indoor growing conditions.

Bush Lily is a sensitive plant which does not like to be disturbed therefore, don't move the plant when in bud or flower and don't repot unless the plant is pushing out of the container.

However, when given the right conditions Bush Lily grows into large clumps. The plant spreads by means of rhizomes and is suitable for shaded spots.

The Bush Lily(Clivia miniata) grows to a height of 18 in. and the flowers about 10-20 are borne on top of a tall stalk.

The flowers in Bush Lily are orange, red, cream and yellow, and may have a faint but very sweet perfume. The flowers about 10-20 are borne on top of a tall stalk.

Natal Lily will not bloom when temperatures are high or if the watering rules are not followed.

Bush Lily (Clivia miniata) is native to the woodland habitats of South Africa as well as Swaziland. 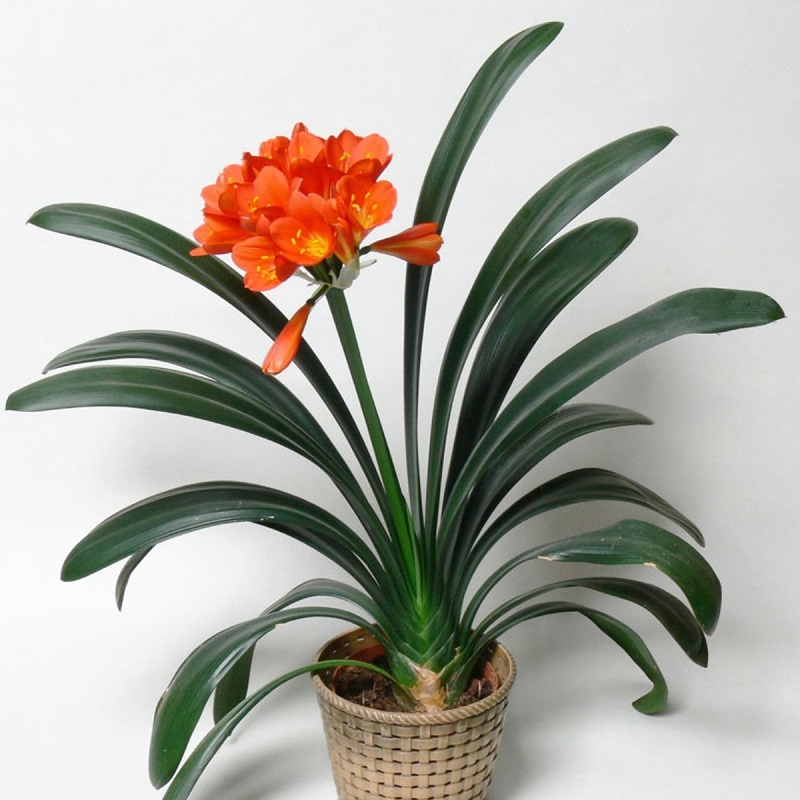 Exposure of the plant to direct sunlight will result in sunscorched leaves. Check out this guide on understanding light for houseplants.

How to Water Bush Lily

Water Bush Lily (Clivia miniata) thoroughly during the growing season to maintain the soil moist through out.

Reduce watering for your Bush Lily during the cold season to maintain the soil barely moist as growth is minimal at this time. Read more on how to water houseplants.

Ensure the pot for Natal Lily has a drainage hole to prevent the soil from getting soggy as it can lead to root-rot disease.

Average room temperature with a minimum of 100C is ideal for Bush Lily. Read more on understanding temperature for houseplants.

Average room humidity is ideal for Bush Lily. The plant has no need for high humidity.

Feed Bush Lily (Clivia miniata) with a phosphorous-rich fertilizer every 2-3 weeks during the growing season.

Withhold feeding during the growth season as growth is minimal at this time. Read more on how to feed houseplants.

How to Prune Bush Lily

Pruning Bush Lily (Clivia miniata) involves removal of dead blooms and leaves to maintain the plant neat and tidy. Cutback the leaves at the base when they begin to shrivel.

How to Repot Bush Lily

Repot Bush Lily (Clivia miniata) after flowering into a pot one size larger than the previous one only when the plant becomes pot-bound. Being pot-bound is important to encourage flowering.

Ensure the pot for your Natal Lily has a drainage hole and the soil is free-draining soil to avoid getting soggy soil as it can lead to root-rot disease and eventual death of the plant.

Bush Lily (Clivia miniata) can be propagated by plant division at repotting time.

How to propagate Bush Lily by plant division

Carefully divide the Bush Lily rhizome into sections while ensuring each section has adequate roots and some leaves.

Pot these Natal Lily sections in moist soil, in individual pots. Ensure the pots have a drainage hole and the soil is free-draining to avoid getting soggy soil as it can lead to root-rot disease.

Place the set up in a warm, well-lit place and maintain the soil moist thorough out.

Allow the new Bush Lily plants to be well established before transplanting after which you can begin routine care. 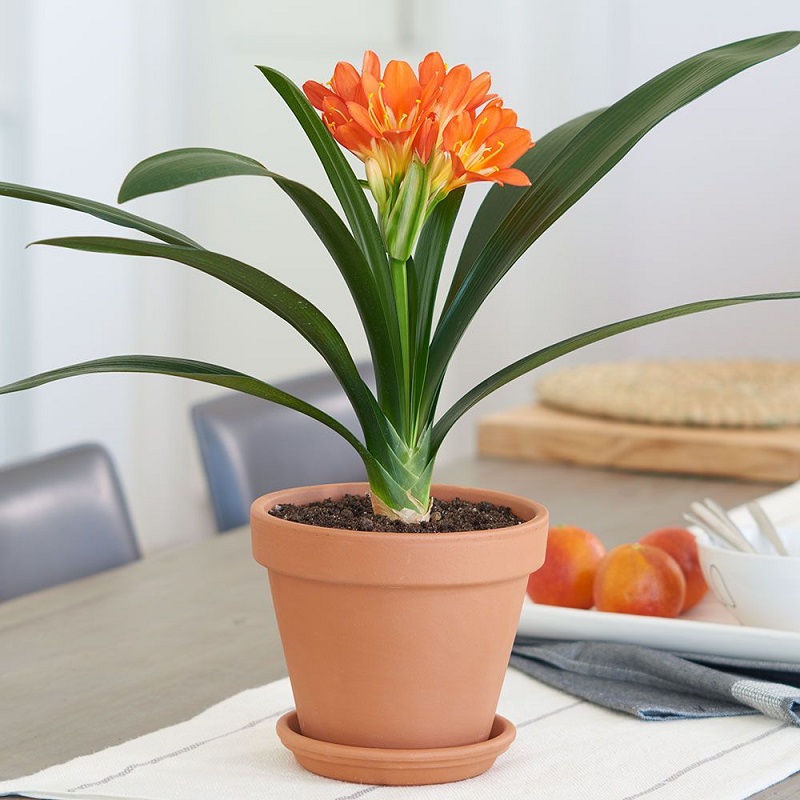 Repot the Bush Lily only when it is extremely pot-bound. Being pot-bound is important to encourage flowering in Bush Lily.

The second possible reason why Natal Lily will not bloom (flower) is underfeeding.

Feed your Bush Lily with a phosphorous-rich fertilizer every 2-3 weeks during the growing season to encourage flowering.

The third possible reason why your Bush Lily is not blooming (flowering) is underwatering.

Water Natal Lily thoroughly during the growing season to maintain the soil moist through out.

The fourth possible reason why Bush Lily is not blooming (flowering) is too high temperature.

Maintain an average room temperature with a minimum of 100C for Natal Lily and protect it from draughts.

The fifth possible reason why Bush Lily is not blooming (flowering) is too little light.

Move the Bush Lily to a brighter spot where it will receive bright light with some direct sunshine.

Yellowing leaves in Bush Lily are an indication of root-rot disease. The leaves begin wilting, turn yellow and rot if the situation is not corrected.

Root-rot disease is a common disease in Natal Lily if the soil becomes soggy. Ensure that the pot has a drainage hole and the soil is free-draining.

Yellowish and washed out leaves in Bush Lily are an indication of exposure of the plant to too hot sunshine. Move the Bush Lily to a shadier spot or protect it from hot direct sunshine.

Maintain the soil consistently moist and never allow the soil ball to dry out completely.

The second possible reasons for flower bud drop in Bush Lily is underfeeding.

Feed Bush Lily every 2-3 weeks during the growing season with a water-soluble, phosphorous-rich fertilizer to promote flowering.

The third possible reasons for flower bud drop in Bush Lily is sudden change in temperature due to cold drafts.

Protect Bush Lily from cold draughts to maintain an average room temperature and do not move it when in bud.

Bush Lily is prone to root-rot disease, damping off, leaf rust and leaf spot which are promoted by overwet conditions.

Ensure the pot has a drainage hole to prevent the soil from getting soggy and reduce watering during the cold season as growth is minimal at this time.

Do not mist Natal Lily and ensure that there is good air circulation to prevent disease infestations.

Bush Lily pests; Mealy Bugs. Isolate the affected plant to prevent spread to other houseplants and treat it appropriately for the pests.

Bush Lily (Clivia miniata) contains small amounts of lycorine which makes it toxic to both humans and pets. Keep it away from the reach of children and pets.