How to Grow and Care for Vanda Orchids Indoors 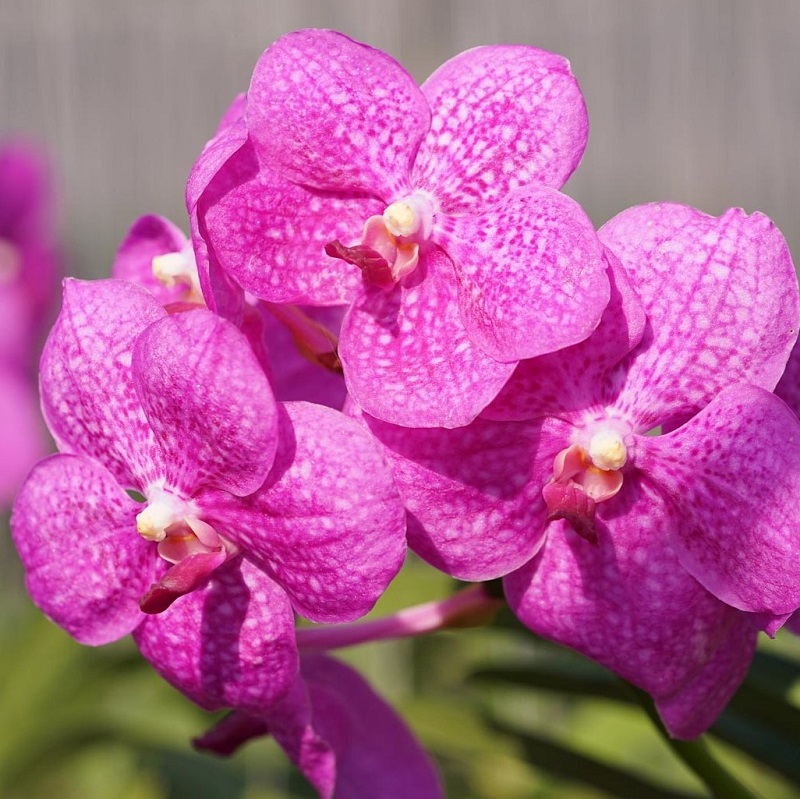 Vanda Orchids are popular plants due to their showy, fragrant, long-lasting and intensely colorful flowers where numerous flowers grow on a lateral flower spike arising from the central stem.

Most Vanda Orchids flowers show a yellow-brown color with brown markings but they also appear in green, white, red, orange, purple, pink and burgundy shades. The lip has a small spur. These orchids bloom every few months and the flowers last for 2-3 weeks.

The growth in Vanda Orchids occurs from a single stem and the leaves are highly variable and adapted to their habitat. The stems vary considerably in size with some growing up to 20 ft tall.

Vanda orchids are monopodial orchids which do not have pseudobulbs but they have leathery, drought-resistant leaves.

They have very large root systems which may require that they be grown in hanging baskets inorder to suspend the roots for adequate room.

These Orchids do not tolerate disturbance or damage to roots and it can result in the orchids failing to flower and declining in growth for a season or more.

Vanda is a genus that is widespread across East Asia, Southeast Asia and New Guinea. Most are epiphytes but some few are terrestrials. The genus name is abbreviated as V. in horticultural journals.

If you are looking to add this beauty to your collection, beautiful Vanda Orchids are readily available online at Etsy. Buy Vanda Orchids online from Etsy. 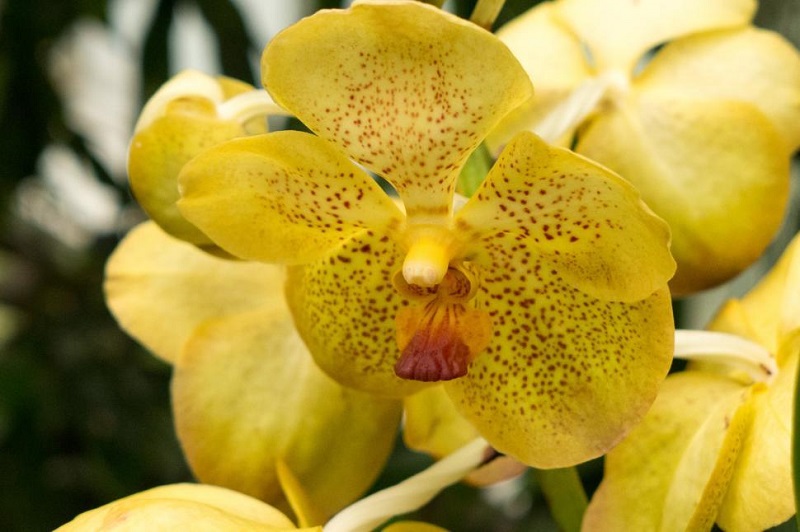 Vanda Orchid requires regular pruning to keep them neat as well as encourage flowering. Repotting is needed only when they become pot-bound or the soil becomes completely broken down. Keep on reading for more on these growing conditions and how to achieve them.

Vanda Orchid grows best in very bright light with some direct sunshine. Keep it away from hot sunshine to avoid sun scorch on the leaves.

Regularly turn the pot to ensure that the orchid gets adequate light on all sides for uniform growth.

A Vanda Orchid that is receiving the right amount of light has light-green leaves.

The Vanda Orchid will also grow under a grow light where natural light is inadequate.

If you are growing the Vanda Orchid in a hanging basket, soak the plant daily until the white or silver roots turn color. Wait for a few minutes and again saturate the orchid.

If you are growing the Vanda Orchid in a bark potting medium, water thoroughly during the growing season and maintain the soil consistently moist.

Reduce watering during the cold season as growth is minimal at this time but do not allow the soil to dry out completely.

Drooping or wrinkly leaves indicate that you are underwatering the Vanda Orchid.

Use tepid, chlorine-free water as Vanda Orchids are sensitive to chlorine and other chemicals dissolved in water. Avoid wetting the foliage as it can lead to fungal diseases.

The best temperatures for growing Vanda Orchid indoors are between 21-290C. Warmer days and cooler night temperatures with a difference of 10-150C are ideal for this orchid. Cool nights are essential to trigger flowering.

Ensure there is good air circulation as the orchid cannot tolerate hot and stuffy conditions.

Keep the Vanda Orchid away from draughts to prevent sudden changes in temperature as they cause reduced growth.

Vanda Orchids require a humid environment to thrive. Set the pot on a wet pebble tray or use a cool mist humidifier to raise humidity.

Do not mist the leaves as it can lead to fungal diseases. Occasionally clean the leaves by damp-wiping with a soft cloth to keep the clean and also discourage pest infestations.

Feed Vanda Orchid every week during the growing season with an orchid's fertilizer as per the manufacturer's instructions.

Withhold feeding during the cold season as growth is minimal at this time. Do not feed an orchid that is in flower.

It is better to err on the side of underfeeding than overfeeding a Vanda Orchid as overfeeding may result in loss of roots thus death of the orchid.

If you overfeed the orchid, it can also lead to vegetative growth instead of flower production.

Repot Vanda Orchid only when growth begins to suffer which is when the lower leaves begin to die. They bloom best when they are pot-bound. Basically repotting every 2 years should be adequate.

Repot the Vanda Orchid only when new growth begins, shortly after blooming is over. Do not repot an orchid that is in flower as it may shorten the flowering season.

Use a pot with proper drainage holes or slits as the roots of a Vanda Orchid need good air circulation. The pot should be only 1 size larger than the current one.

Use a loose, free-draining, bark soil to prevent the soil from getting soggy as it can lead to rotting of the orchid.

When repotting, remove all the soil from around the stems and roots and trim off any dried and shrivelled roots.

Remove any dead and dying leaves from the bottom as they are breeding ground for pests and diseases. Remove dead roots to create space for the growth of new roots.

Water the orchid thoroughly and ensure that both the soil and the roots absorb all the water they need.

The best soil for Vanda Orchid should be rich in organic matter, loose, free-draining bark soil to prevent it from getting soggy while providing the required nutrients.

Most orchid potting mixes are ideal for this orchid. Buy quality Orchid Potting Mix for Vanda Orchid online from Etsy.

Pruning Vanda Orchid is easy. Remove dead and diseased leaves by cutting them at the base with sharp scissors or a knife. When flowering is over, cut the flower stalk 1 in. above the 3rd node from the bottom.

Vanda Orchid propagation can be done at the beginning of the growing season once flowering is over from stem cutting or from keikis.

How to propagate Vanda Orchid from stem cuttings

Vanda Orchid produces aerial roots along the stem at the nodes. Take a stem cutting from the tip of the Vanda Orchid by cutting between the stem nodes.

Apply a fungicide on the cuts to prevent fungal infestations.

Feed the mother orchid with a balanced water-soluble fertilizer to promote the growth of new shoots.

Pot the cutting in fresh orchid soil and place the set up in a warm, well-lit place away from direct sunlight.

Water thoroughly until water comes through the drainage holes and allow the soil to dry out between waterings.

Allow the new Vanda Orchid to be well established before moving it to its display position.

How to propagate Vanda Orchid from keikis

Keiki growth can be triggered by prolonged exposure to high temperature during the final phase of spike growth.

The keiki can be detached from the mother Vanda Orchid when about one year old when it has developed 2-3 leaves and 1-3 in. long roots.

Pot the keiki in fresh potting medium. Direct the roots of the keiki downwards and provide support for the keiki.

Place the set up in a well-lit place and mist the keiki regularly to maintain a humid enviroment.

Allow the new Vanda Orchid to be well established before transplanting it after which you can begin routine care. 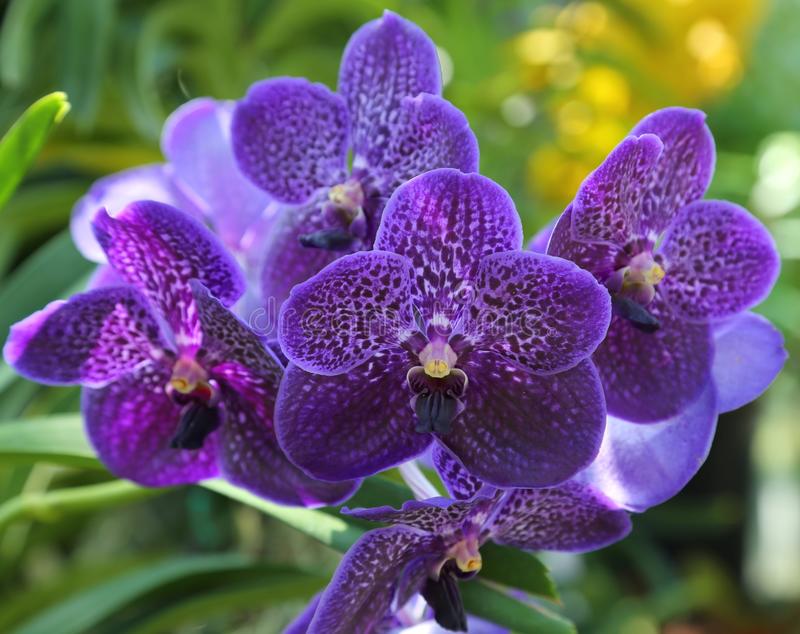 Vanda Orchid problems indoors include black leaf tips, lack of blooms, mold, drooping leaves, leaf spots, discolored leaves, pests and diseases among others. Keep reading for more on these problems and how to fix them.

Dark green leaves in Vanda Orchid indicate that your orchid is not getting enough light. The leaves of a Vanda Orchid that is receiving the correct light should be light-green.

Move the orchid to a brighter spot where it will receive very bright light with some direct sunlight or instal a grow light if the natural lighting is inadequate.

Yellowish leaves in Vanda Orchid indicate that the orchid is getting too much sunlight that is very hot sunshine.

Move the Vanda Orchid to a shadier spot away from too hot direct sunlight. The leaves of a Vanda Orchid that is receiving bright light with some sunshine should be light-green.

The cause of black leaf tips in Vanda Orchid is the presence of chemicals like chlorine and flourides in the water or accumulation of salts in the soil.

Use chlorine-free water only to water Vanda Orchid and flush out accumulated salts from the soil by running a stream of water through the soil for about 10 minutes until it comes out through the drainage holes.

One possible reason why Vanda Orchid is not blooming is too little light as it requires very bright light with some direct sunshine to thrive.

Move the orchid to a brighter spot and ensure it is receiving bright light with some direct sunshine or instal a grow light if the natural lighting is not adequate.

Overfeeding a Vanda Orchid can result in vegetative growth at the expense of flowers production.

Feed the orchid once weekly during the growing season with an orchid's fertilizer as per the manufacturer's instructions. Do not feed it during the cold season.

Mold on the leaves in a Vanda Orchid is an indication of powdery mildew disease.

Misting the leaves may lead to mildew growth if the water does not evaporate quickly. Ensure that there is good air circulation for the Vanda Orchid and stop misting it.

Brown soft leaf spots in Vanda Orchid are an indication of a fungal disease. Remove the affected leaves immediately to prevent further spread.

Exposure of Vanda Orchid to direct sunshine will result in scorch marks which are brown hard and dry spots on the leaves. Move the orchid to a shadier spot or protect it from hot direct sunshine.

Limpy and drooping leaves in Vanda Orchid are caused by underwatering. Do not allow the soil to dry out at all. Water the orchid thoroughly and maintain the soil consistently moist.

The common plant pests in Vanda Orchids are Mealy Bugs, Scale Insects, Slugs and Snails. Isolate the affected orchid to prevent spread to other houseplants and treat it appropriately for the pests.

Vanda Orchids (Vanda spp) are non-toxic to both humans and pets. They are safe to grow indoors.