How to Grow and Care for Leopard Orchid (Ansellia africana) Indoors 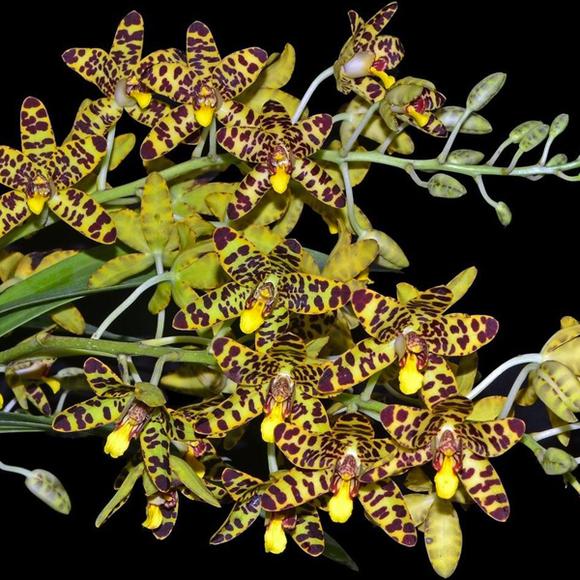 Trash Basket Orchids have white, needle-like aerial roots which point upwards, taking the form of a basket around large, yellow, cane-like pseudobulbs. This basket catches the decaying leaves and litter upon which the plant feeds.

Ansellia orchids are easy to grow requiring very bright light and a dry rest of about 4-6 weeks in order to produce blooms. They are very drought tolerant but they perform better if kept evenly moist throughout the year.

Leopard Orchid is listed as an endangered species due to overexploitation and destruction of its natural habitats.

The orchid has been shown to have some medicinal uses in the treatment of Alzheimer's disease.

The pseudobulbs in Leopard Orchids give rise to the tall flower-spikes about 2.5 ft tall with many (upto 100) delicately scented flowers.

The flowers are short-lived, lasting about 10 days only but they are produced in abundance.

Leopard Orchids are large, perennial epiphytes in their native habitat where they are found sometimes in spectacular clumps attached to the branches of tall trees.

Ansellia africana are native to tropical and southern Africa. They are found alongside coasts and rivers in the canopy of trees.

John Ansell, an English assistant botanist named Leopard Orchids in 1841 when he found the first plant in Fernando Po Island in West Africa. The genus name is abbreviated as Ansel or Aslla in horticultural journals. 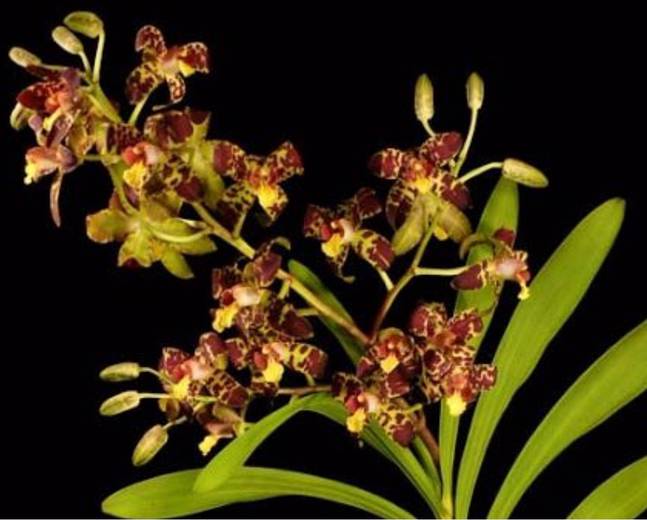 Trash Basket Orchids require repotting only when growth begins to suffer or when the growing medium is completely broken down. Pruning is necessary to keep the plant neat as well as discourage pest and disease infestations. Keep reading for more on these growing conditions and how to provide them.

Keep it away from hot direct sunshine to avoid sun scorch on the leaves and regularly turn the pot to ensure that it gets adequate light on all sides for even growth.

If the natural lighting is not adequate, consider investing in a grow light to supplement it inorder to promote a lush growth.

For lush growth and regular blooms, water Leopard Orchid thoroughly during the growing period and allow the top 2-3 in. of soil to dry out between waterings to keep the soil moderately moist.

Cut down on watering in the cold period as growth is minimal at this time. Avoid soggy soil as it can cause the orchid to rot.

Provide a dry spell of about 4-6 weeks, every 6 months to promote blooming. As in their natural habitat, Leopard Orchids usually bloom at the end of dry spells.

Use tepid, chlorine-free water as Trash Basket Orchids are sensitive to chlorine and other chemicals dissolved in water. Avoid wetting the foliage as it can lead to fungal diseases.

Leopard Orchids are more tolerant of dry soil conditions due to the presence of pseudobulbs and their thick leaves. Therefore, take care not to overwater it.

The best temperatures for growing Ansellia africana indoors are between 16-290C. The warmer days and cooler night temperatures are ideal for these orchids. Cool nights are essential to trigger flowering.

Keep the orchids away from draughts to avoid sudden changes in temperatures as they can negatively affect growth. Check out this guide on Understanding temperature for houseplants.

High humidity is essential for Leopard Orchids to thrive. Set the pot on a wet pebble tray or use a cool mist humidifier to raise humidity.

Do not mist the leaves as it can lead to fungal diseases. Occasionally clean the leaves by damp-wiping with a soft cloth to get rid of dust and minimize pests infestations.

If Leopard Orchids are not receiving adequate nitrogen, they will start growing a trash basket with numerous non-absorbing roots growing upwards.

Stop feeding during the cold season as growth is minimal at this time. Do not feed an orchid that is in flower.

In feeding, it is better to err on the side of underfeeding than overfeeding as overfeeding may result in the loss of roots thus death of the orchid. It can also lead to vegetative growth instead of flower production.

Leopard Orchids bloom best when they are pot-bound. Repot only when growth begins to suffer.

Repot when the orchid has outgrown its pot and the new growth reaches out over the edge of the pot or when the soil has broken down completely.

It is advisable to repot only when new growth begins, shortly after blooming is over.

Repot the Leopard Orchid into a pot with proper drainage holes or slits as the roots need good air circulation.

The pot should be only 1 size larger than the current one. Use loose, free-draining bark soil.

When repotting, shake off excess soil and trim off any dried and shrivelled pseudobulbs.

The best soil for Leopard Orchid should be rich in organic matter, loose, free-draining bark soil to prevent it from getting soggy while providing the required nutrients.

Pruning Ansellia africana is easy. It involves removal of dead and diseased leaves to keep the plant neat and tidy as well as discourage pest and disease infestations.

Remove the leaves by cutting them off at the base with a clean sharp pair of scissors or knife. Make clean cuts and avoid injuring the orchid unnecessarily to avoid fungal diseases.

Leopard Orchid (Ansellia africana) can be propagated at the beginning of the growing season once flowering is over by division of the rhizome.

How to propagate Leopard Orchid from rhizomes

Gently split the Leopard Orchid rhizome into sections. Retain at least 3 shoots on each section. Seperate the roots attached to each division from the mother's root ball. Remove the old potting soil attached to the roots.

Fill the pot with Orchid Potting Mix and place each section in the center of the pot and bury the roots in the soil. Ensure that the bottom of the pseudobulb is level with the top of the soil.

The best pot should be about 1-2 in. larger than the pseudobulb. Ensure the pot has enough drainage holes and slits to prevent root-rot.

Place the set up in a warm well-lit place until the new Orchids have established their own roots. 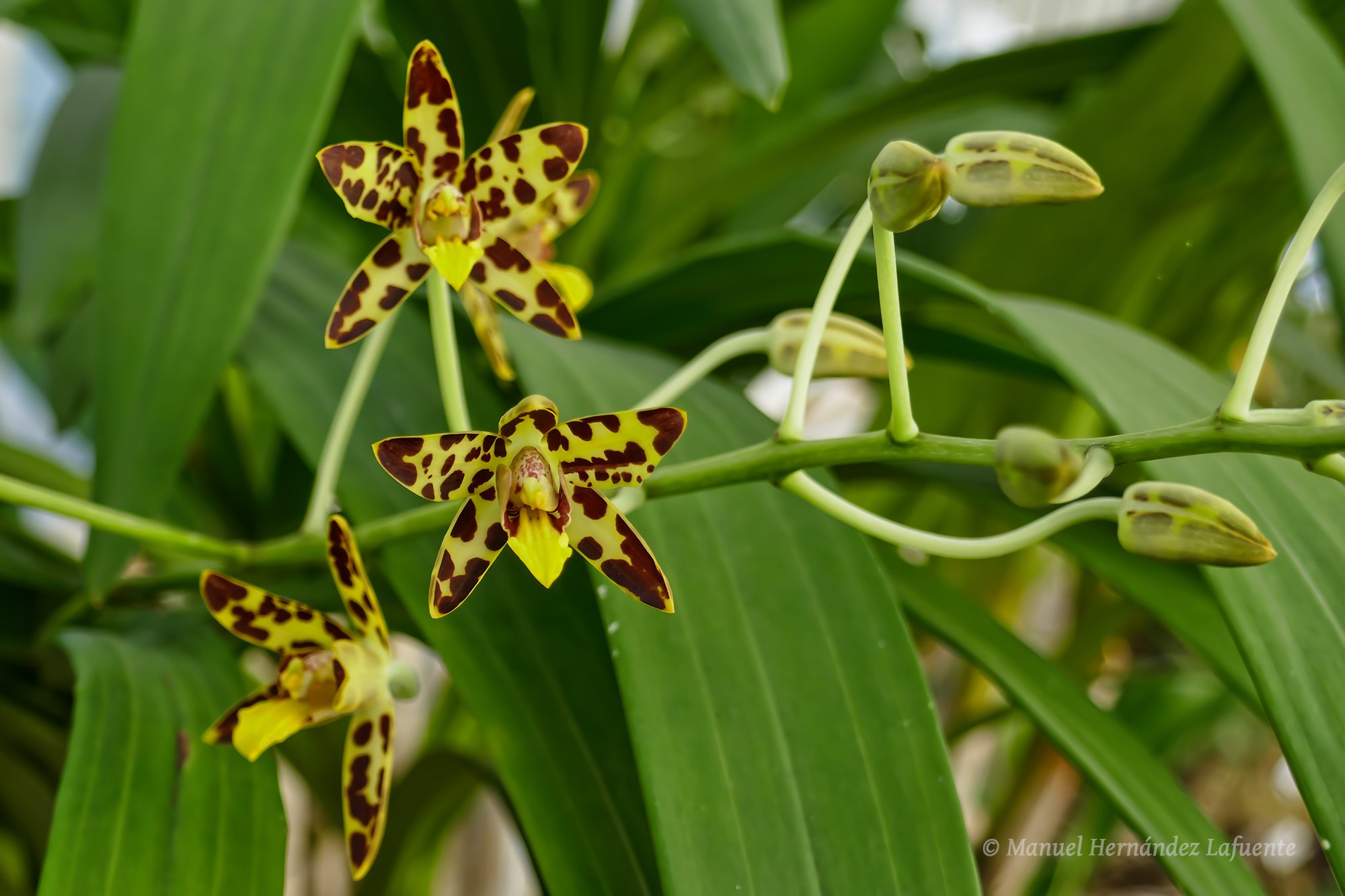 Leopard Orchid (Ansellia africana) problems indoors include leaf spots, brown leaf tips and edges, drooping leaves, lack of blooms, diseases and pests all of which are due to improper care. Keep reading for more on these problems and how to fix them.

Mold on leaves in Leoparad Orchid is an indication of powdery mildew disease which is brought about by overwet conditions coupled with poor air circulation.

Misting the orchid leaves may lead to mildew growth if the water does not evaporate quickly.

Improve ventilation, ensure that there is good air circulation for the orchid and stop misting it. Read on how to treat powdery mildew disease in houseplants.

Limpy and drooping leaves in Leopard Orchid are caused by underwatering. Do not allow the soil to dry out completely.

Water the Orchid thoroughly during the growing season, maintain the soil moderately moist and allow only the top half of the soil to dry out between waterings.

Decrease watering during the cold season to keep the soil slightly moist but do not allow the soil to dry out completely.

The cause of black leaf tips in Leopard Orchid is the presence of chemicals like chlorine and flourides in the water or accumulation of salts in the soil.

Use chlorine-free water only to water Leopard Orchid and flush out accumulated salts from the soil by running a stream of water through the soil for about 10 minutes until it comes out through the drainage holes. Repeat the process several times.

One reason for lack of blooms in Leopard Orchid is too little light. Position the orchid in a brighter spot where it will receive very bright light with some morning or late evening direct sunshine.

The second reason for lack of blooms in Leopard Orchid is underfeeding. Feed the orchid weekly during the growing season with a nitrogen-rich, water-soluble, orchid fertilizer.

The third reason for lack of blooms in Leopard Orchid is too dry air. The orchid requires a humid environment to thrive.

To increase humidity, set the pot on a wet pebble tray or use a cool mist humidifier.

Exposure of Leopard Orchid to hot direct sunshine will result in scorch marks which are brown hard and dry spots on the leaves.

Place the orchid to a shadier spot or instal a sheer curtain to filter the light and protect the orchid from hot direct sunshine but ensure that it receives very bright light with some morning or late evening direct sunshine.

Dark green leaves in Leopard Orchid indicate that the orchid is not getting enough light as it grows best in very bright light with some morning or late evening direct sunshine.

Move the Leopard Orchid to a brighter spot where it will receive very bright light with some morning or late evening direct sunshine or instal a grow light to supplement lighting if it is not adequate.

The leaves of a Leopard Orchid that is receiving the correct amount of light should be light green.

Yellowish leaves in Leopard Orchid indicate that the orchid is getting too much light. Move the orchid to a shadier spot to avoid loss of leaf color. The leaves of a Leopard Orchid that is receiving the correct amount of light should be light green.

Brown soft leaf spots in Leopard Orchid are an indication of a fungal disease. Remove the affected leaves immediately to prevent further spread.

Leopard Orchids (Ansellia africana) are non-toxic to both humans and pets. They are safe to grow indoors.