How to Grow and Care for Azalea Plant (Rhododendron simsii) Indoors 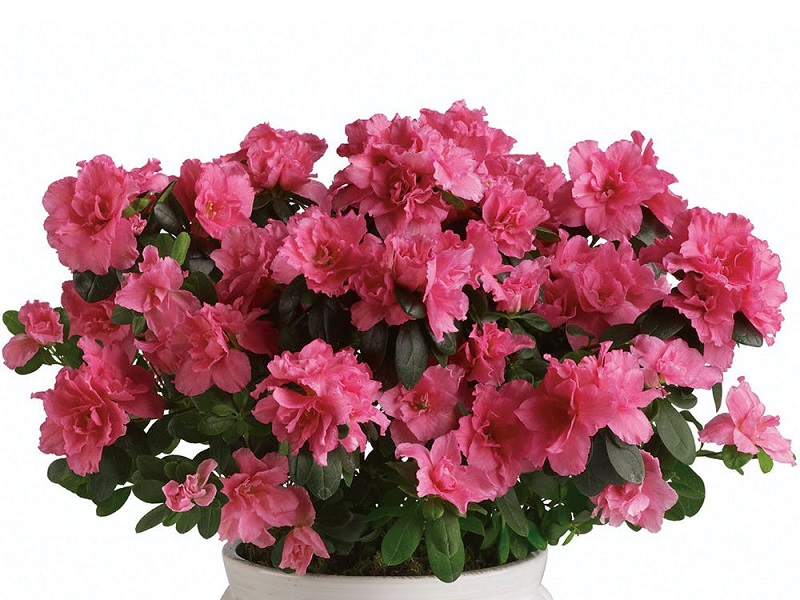 Rhododendron simsii or Azalea is a popular flowering plant that will add a splash of color when in bloom but does not last very long under room conditions.

Azalea is only displayed when in bloom after which it is taken away until the next bloom or discarded altogether. It will thrive as a garden shrub if planted out when flowering is over.

The brightly colored blooms will brighten up any dull room. To keep it in bloom for many weeks up to 3-4 weeks, keep it wet (not just moist), distinctly cool and brightly lit.

The blooms are terminal meaning the entire plant blooms at one time which makes a colorful display. They are a profusion of shades of pink, red, white, peach, lavender or bi-colors.

Rhododendron simsii is native to several continents including Asia, Europe and North America. There are over 10,000 different cultivars of Azalea. 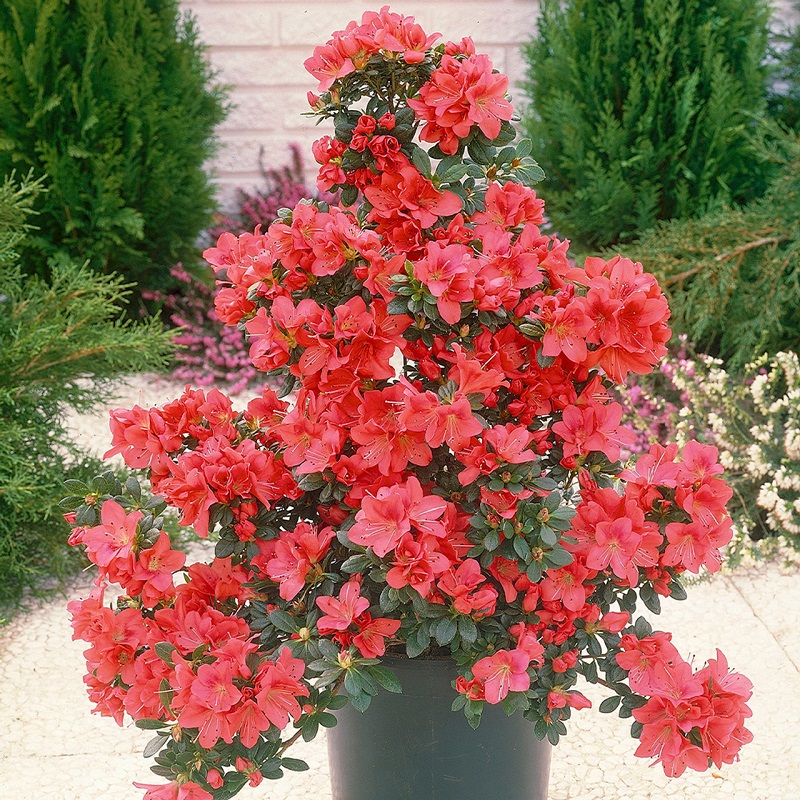 Azalea requires repotting only when it has outgrown its current pot as it blooms best when pot-bound. Cutting back of the stems is necessary after flowering to encourage more flowering. Keep reading for more on these growing conditions and how to achieve them.

Azalea grows best in bright light conditions but away from direct sunlight as it can scorch the leaves.

Regularly rotate the pot to ensure that the plant receives light on all sides for even growth.

It can also grow under a grow light where the natural lighting is inadeqaute.

Water Azalea liberally during the growing season while allowing the top 1-2 in. of soil to dry out between waterings to keep the soil moist at all times.

Water less during the cold period as growth is minimal at this time to keep the soil slightly moist but do not allow the soil to dry out completely.

Occasionally water by the immersion method as it ensures that the soil is thoroughly wetted.

Water Rhododendron simsii with chlorine-free water as they are sensitive to chlorine and other chemicals dissolved in water.

Ensure the pot has a drainage hole to prevent the soil from getting soggy as it can lead to root-rot disease and eventual death of the plant.

Azalea prefers cool to average warmth with a minimum of 100C. Very high temperatures will result in flower bud drop.

Keep Rhododendron simsii away from cold and hot draughts to avoid sudden changes in temperatures.

Azalea prefers moderate humidity. Do not mist the leaves as it can lead to fungal infestation.

To raise humidity, where the temperatures are very high, set the pot on a wet pebble tray or use a cool mist humidifier.

Feed Azalea with a fertilizer formulated for acid-loving plants every 2-3 weeks during the growing season. Do not feed a plant that is in flower as it can shorten the flowering period.

Repot Azalea during the growing season only when the plant is extremely pot-bound as it blooms more when pot-bound. Do not repot a plant that is in flower as the repotting shock can shorten the flowering period.

Use a pot 1 size larger than the current one and one that has a drainage hole to prevent the soil from getting soggy as it can lead to root-rot disease and eventual death of the plant.

The best soil for Azalea should be rich in organic matter and free-draining like this quality potting mix available on Amazon.

Prune Azalea yearly after flowering by cutting back the stems to the desired height. This will encourage growth of new stem tips from which the flowers grow which means the plant will bloom even more.

Rhododendron simsii propagation can be done from stem cuttings but they take long to root and do not stay true to type. It is preferable to buy a plant from the breeders like these Azalea Plants (Rhododendron simsii) available on Etsy. 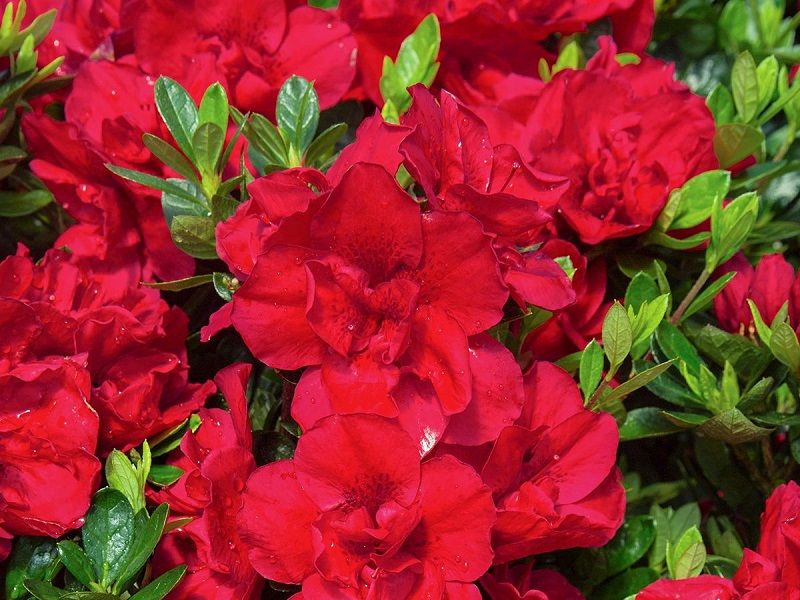 Azalea (Rhododendron simsii) problems indoors include leaf drop, yellow leaves, flowerbud drop, short flowering, shrivelled leaves, pests and diseases among others. Keep reading for more on these problems and how to fix them.

Short flowering period in Azalea is caused by hot dry air which causes the air humidity to be too low.

Keep the plant away from hot air drafts and set the pot on a wet pebble tray or use a cool mist humidifier to raise humidity.

Avoid exposing the plant to the hot direct sunlight and maintain the soil consistently moist. Never allow the soil to dry out even slightly.

Yellow leaves in Azalea are due to watering the plant with hard water; chlorinated water is not suitable for this plant.

Azaleas are acid loving plants and therefore should not be watered with hard water or chorinated water. Use distilled or rain water only to water the plant.

Flower bud drop in Azalea Plant is caused by too dry air (low humidity). Dry air will cause the flower buds to shrivel, turn brown and drop.

Yellow leaves with green veins in Azalea is a sign of a nutrient deficiency due to high alkalinity in the soil. Azaleas prefer an acidic soil. Feed the plant with a phosphorous-rich fertilizer formulated for acid-loving plants every 2-3 weeks during the growing season.

Leaf drop in Azalea is due to incorrect watering; either underwatering or overwatering. Maintain the soil moist at all times and avoid soggy soil by ensuring that the pot has a drainage hole. Never allow the soil to dry out even slightly.

The common diseases in Azalea Plant are powdery mildew where the new leaves curl, become pale, then brown and die. Discard the plant as it will not recover.

Another common disease in Azalea is root-rot which is promoted by soggy soil. Ensure the soil is free-draining and the pot has a drainage hole to prevent the soil from getting soggy.

The common pests in Azalea Plant are spider mites, scale insects and nematodes. Isolate the affected the plant to prevent spread to the other houseplants and treat it appropriately for the pests. Read more on how to identify and get rid of pests in houseplants.

Azalea Plant (Rhododendron simsii) is toxic to humans and pets. If ingested it can cause a burning sensation in the mouth, drooling, vomiting, diarrhea and lethargy. Keep Azaleas from the reach of children and pets.