How to grow and care for Caladiums Indoors 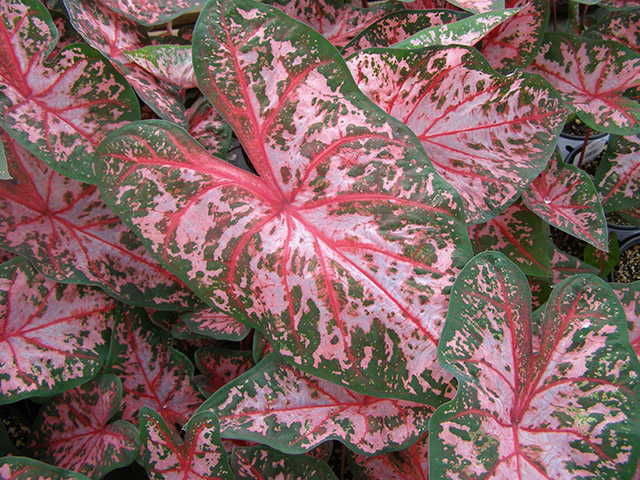 Caladiums, commonly called Elephant's Ears, Angel's Wings or Heart of Jesus bear striking arrow-shaped, paper thin and beautifully marked leaves. The common colors are white, pink and red. This dazzling foliage only lasts a short time from late spring to early autumn. Thereafter it dies and the plant goes dormant which is a natural characteristic of this plant. Caladiums grow from tubers which can be saved after the foliage dies to be replanted in the next year to propagate new plants. Store the tubers in sand or sawdust at a temperature of between 15-320C . Temperatures outside this range will cause damage to the tubers which will result in stunted growth of the plants. The tubers can also be allowed to remain in the same pot until the next growing season. Keep the pot dry; do not water. When the temperatures become warmer (early spring), watering can resume, new growth will emerge and normal routine care can continue.

These plants are native to South America and Central America and naturalized in India, parts of Africa and various tropical islands. They grow in open areas of the forest and on banks of rivers and go dormant during the dry season. In the wild they can grow to a height of 15-35 in., while leaves can be 6-18 in. long and broad. There are over 1000 named cultivars of Caladiums. In cultivation most cultivars grow to about 24 in. high and 24 in. wide, although there are dwarf varieties in cultivation now. They grow from tubers and can be propagated by dividing the tubers.

How to Grow Caladiums

Partial to full shade and away from direct sunlight is ideal for Caladiums. Newer varieties with narrower leaves have been developed which can tolerate some direct sunlight. Learn how to ensure your plant receives the correct light in this guide on understanding light for houseplants.

Caladiums need to watered liberally during the growing seasonto maintain the soil moist at all times. Never allow the soil to dry out. Avoid waterlogging as it can lead to root-rot. Learn more on how to water houseplants.

The ideal temperature for Caladiums is average warmth with a minimum of 150C during the growing season. The warmer the temperature the better the growth of the plant. They can't tolerate cold therefore protect the plant from cold draughts. Learn more on temperature for houseplants in this guide.

Mist the leaves regularly during the hot weather and set the pot on a wet pebble tray to raise humidity. Clean the leaves by damp-wiping with a soft cloth to get rid of dust.

Caladiums need to provided with adequate nutrients for their optimal grow. Apply a slow release fertilizer at planting time or apply a balanced water-soluble fertilizer once a week during the growing period. Do not feed a plant that is in dormancy. Learn more on feeding houseplants.

Repotting is not necessary as Caladiums last only a few months.

Pruning Caladiums is simple. Remove yellow and dry leaves to maintain the plant neat and reduce chances of disease and pest infestation. Remove dead foliage from the bulbs when growth is over.

How to Propagate Caladiums

Propagation of Caladiums is done at the beginning of the growing season (early spring) by use of tubers. Large tubers can be divided into several sections. Ensure each division has at least a node (growing point) from which new growth will sprout. Bury the tubers about 1 in. deep with the growing point side up in moist, free-draining soil. Ensure the pot has a drainage hole to prevent waterlogging. Place the set up in a warm place until growth emerges. Allow the plant to be well established before transplanting.

These are sunburn marks due to exposure to direct sunlight. Protect Caladiums from direct sunshine or move it to a shaded spot.

This is a natural characteristic, Caladiums go into dormancy after a few months.

Common pests in Caladiums are Aphids and Caterpillars. Regularly inspect the plant for ragged leaf margins.

All parts of Caladiums are toxic to both humans and pets if ingested. They may cause burning in the mouth and throat, drooling, vomiting, diarrhea and abdominal pains if ingested. Handling the plant sap may cause skin dermatitis in sensitive skin; always wear gloves when handling.